Advisors Asset Management Inc. lessened its stake in shares of ACADIA Pharmaceuticals Inc. (NASDAQ:ACAD – Get Rating) by 13.1% during the 2nd quarter, according to its most recent disclosure with the SEC. The institutional investor owned 24,491 shares of the biopharmaceutical company’s stock after selling 3,706 shares during the period. Advisors Asset Management Inc.’s holdings in ACADIA Pharmaceuticals were worth $345,000 as of its most recent filing with the SEC.

In other news, CEO Stephen Davis sold 2,804 shares of the stock in a transaction on Saturday, October 15th. The stock was sold at an average price of $15.81, for a total value of $44,331.24. Following the completion of the transaction, the chief executive officer now directly owns 79,009 shares in the company, valued at approximately $1,249,132.29. The sale was disclosed in a filing with the Securities & Exchange Commission, which can be accessed through this hyperlink. 28.40% of the stock is owned by corporate insiders.

Want to see what other hedge funds are holding ACAD? Visit HoldingsChannel.com to get the latest 13F filings and insider trades for ACADIA Pharmaceuticals Inc. (NASDAQ:ACAD – Get Rating). 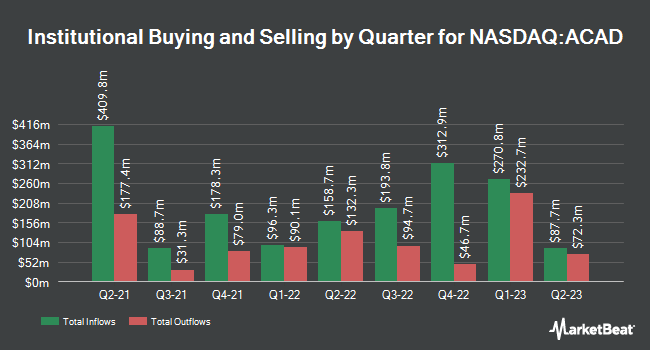