Oppenheimer & Co. Inc. bought a new position in shares of Himax Technologies, Inc. (NASDAQ:HIMX – Get Rating) in the 2nd quarter, according to its most recent disclosure with the SEC. The institutional investor bought 19,300 shares of the semiconductor company’s stock, valued at approximately $145,000.

Several brokerages recently commented on HIMX. StockNews.com upgraded Himax Technologies from a “sell” rating to a “hold” rating in a research report on Saturday. TheStreet cut Himax Technologies from a “b-” rating to a “c+” rating in a report on Tuesday, September 13th. Four equities research analysts have rated the stock with a hold rating, Based on data from MarketBeat.com, the company currently has a consensus rating of “Hold” and an average target price of $9.67.

Want to see what other hedge funds are holding HIMX? Visit HoldingsChannel.com to get the latest 13F filings and insider trades for Himax Technologies, Inc. (NASDAQ:HIMX – Get Rating). 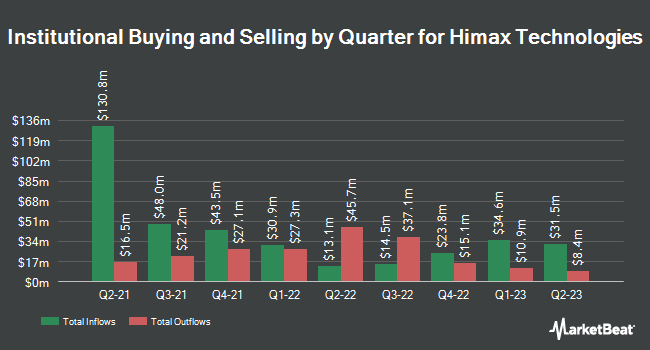 Complete the form below to receive the latest headlines and analysts' recommendations for Himax Technologies with our free daily email newsletter: