In other Brightcove news, major shareholder Edenbrook Capital, Llc bought 20,688 shares of Brightcove stock in a transaction dated Wednesday, November 16th. The shares were purchased at an average cost of $5.49 per share, for a total transaction of $113,577.12. Following the acquisition, the insider now directly owns 5,608,490 shares in the company, valued at approximately $30,790,610.10. The acquisition was disclosed in a filing with the SEC, which is accessible through the SEC website. Insiders have acquired a total of 398,852 shares of company stock worth $2,408,596 in the last three months. Insiders own 3.70% of the company’s stock.

Brightcove (NASDAQ:BCOV – Get Rating) last announced its quarterly earnings results on Wednesday, November 2nd. The software maker reported $0.05 earnings per share (EPS) for the quarter, beating analysts’ consensus estimates of $0.03 by $0.02. The company had revenue of $53.90 million for the quarter, compared to the consensus estimate of $52.50 million. Brightcove had a negative net margin of 1.49% and a positive return on equity of 1.91%. Brightcove’s revenue for the quarter was up 3.3% compared to the same quarter last year. During the same period in the previous year, the firm posted $0.05 EPS. As a group, analysts forecast that Brightcove Inc. will post -0.1 EPS for the current fiscal year.

A number of research analysts recently weighed in on BCOV shares. Rosenblatt Securities started coverage on shares of Brightcove in a research note on Thursday, September 8th. They set a “neutral” rating and a $8.00 target price on the stock. StockNews.com downgraded shares of Brightcove from a “strong-buy” rating to a “buy” rating in a report on Thursday, November 3rd. 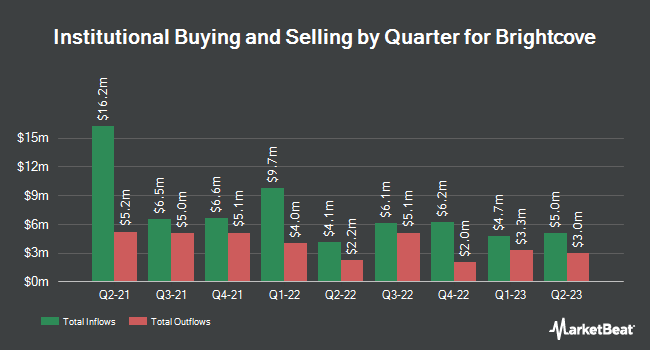 Complete the form below to receive the latest headlines and analysts' recommendations for Brightcove with our free daily email newsletter: