H World Group (NASDAQ:HTHT – Get Rating) will issue its quarterly earnings data before the market opens on Monday, November 28th. Analysts expect the company to announce earnings of ($0.05) per share for the quarter. Parties that wish to register for the company’s conference call can do so using this link.

H World Group (NASDAQ:HTHT – Get Rating) last issued its quarterly earnings data on Monday, August 29th. The company reported ($0.17) earnings per share (EPS) for the quarter, missing analysts’ consensus estimates of ($0.12) by ($0.05). H World Group had a negative return on equity of 15.16% and a negative net margin of 12.25%. The company had revenue of $504.00 million for the quarter, compared to the consensus estimate of $510.18 million. On average, analysts expect H World Group to post $0 EPS for the current fiscal year and $1 EPS for the next fiscal year.

A number of brokerages have weighed in on HTHT. HSBC lowered their target price on H World Group from $52.20 to $46.90 and set a “buy” rating for the company in a report on Wednesday, August 31st. StockNews.com downgraded H World Group from a “hold” rating to a “sell” rating in a report on Monday, November 7th. One analyst has rated the stock with a sell rating and four have issued a buy rating to the company. Based on data from MarketBeat.com, H World Group currently has a consensus rating of “Moderate Buy” and a consensus target price of $45.97. 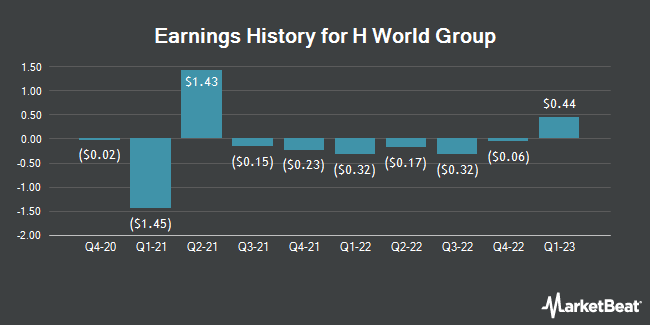 Complete the form below to receive the latest headlines and analysts' recommendations for H World Group with our free daily email newsletter: