A number of equities research analysts recently commented on TGI shares. Wolfe Research started coverage on Triumph Group in a research note on Monday, October 10th. They set an “underperform” rating and a $9.00 price objective for the company. StockNews.com upgraded Triumph Group from a “sell” rating to a “hold” rating in a report on Friday, November 11th. Finally, Truist Financial reduced their target price on Triumph Group from $20.00 to $14.00 in a report on Wednesday, October 12th. One research analyst has rated the stock with a sell rating, three have given a hold rating and three have issued a buy rating to the company’s stock. According to data from MarketBeat, the stock currently has an average rating of “Hold” and an average price target of $18.29.

Triumph Group (NYSE:TGI – Get Rating) last issued its quarterly earnings results on Tuesday, November 8th. The aerospace company reported $0.07 EPS for the quarter, beating analysts’ consensus estimates of ($0.04) by $0.11. Triumph Group had a negative return on equity of 6.67% and a net margin of 6.81%. The company had revenue of $307.60 million for the quarter, compared to analyst estimates of $297.57 million. During the same period in the previous year, the company posted $0.10 earnings per share. The company’s quarterly revenue was down 13.9% compared to the same quarter last year. On average, equities analysts expect that Triumph Group, Inc. will post 0.52 EPS for the current year. 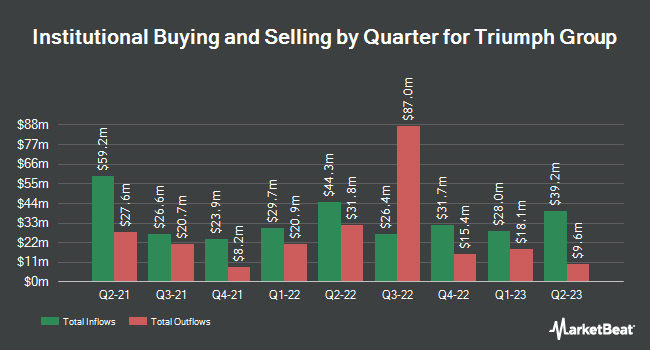 Complete the form below to receive the latest headlines and analysts' recommendations for Triumph Group with our free daily email newsletter: