Synovus Financial Corp boosted its position in Arrow Electronics, Inc. (NYSE:ARW – Get Rating) by 3.5% in the second quarter, according to the company in its most recent disclosure with the Securities and Exchange Commission. The institutional investor owned 3,232 shares of the technology company’s stock after purchasing an additional 108 shares during the quarter. Synovus Financial Corp’s holdings in Arrow Electronics were worth $359,000 at the end of the most recent quarter.

Arrow Electronics (NYSE:ARW – Get Rating) last posted its quarterly earnings results on Thursday, November 3rd. The technology company reported $5.45 earnings per share for the quarter, topping the consensus estimate of $5.39 by $0.06. Arrow Electronics had a return on equity of 27.82% and a net margin of 3.93%. The firm had revenue of $9.27 billion during the quarter, compared to analysts’ expectations of $9.28 billion. During the same quarter in the previous year, the business earned $4.04 earnings per share. The company’s revenue was up 8.9% on a year-over-year basis. As a group, research analysts expect that Arrow Electronics, Inc. will post 22.21 EPS for the current fiscal year.

Arrow Electronics announced that its Board of Directors has initiated a stock buyback program on Thursday, September 15th that authorizes the company to repurchase $600.00 million in outstanding shares. This repurchase authorization authorizes the technology company to buy up to 9.6% of its stock through open market purchases. Stock repurchase programs are typically a sign that the company’s management believes its stock is undervalued.

In other news, SVP Vincent P. Melvin sold 6,000 shares of the firm’s stock in a transaction dated Tuesday, November 15th. The shares were sold at an average price of $112.03, for a total transaction of $672,180.00. Following the sale, the senior vice president now owns 19,381 shares of the company’s stock, valued at approximately $2,171,253.43. The sale was disclosed in a legal filing with the SEC, which is accessible through this hyperlink. 1.00% of the stock is owned by insiders.

A number of brokerages have issued reports on ARW. Wells Fargo & Company cut Arrow Electronics from an “equal weight” rating to an “underweight” rating in a research note on Friday, September 16th. Stifel Nicolaus lowered their price target on Arrow Electronics from $130.00 to $105.00 and set a “hold” rating for the company in a research report on Monday, October 10th. Finally, StockNews.com initiated coverage on shares of Arrow Electronics in a research note on Wednesday, October 12th. They issued a “buy” rating on the stock. One investment analyst has rated the stock with a sell rating, two have issued a hold rating and two have given a buy rating to the company’s stock. According to data from MarketBeat, Arrow Electronics has a consensus rating of “Hold” and an average target price of $127.00.

Want to see what other hedge funds are holding ARW? Visit HoldingsChannel.com to get the latest 13F filings and insider trades for Arrow Electronics, Inc. (NYSE:ARW – Get Rating). 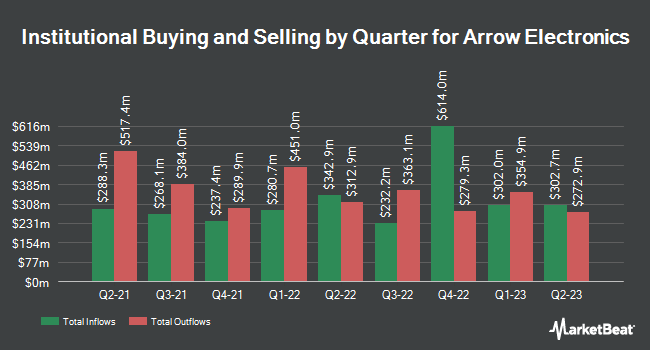 Complete the form below to receive the latest headlines and analysts' recommendations for Arrow Electronics with our free daily email newsletter: