California Public Employees Retirement System increased its stake in shares of Range Resources Co. (NYSE:RRC – Get Rating) by 17.4% during the second quarter, according to its most recent disclosure with the Securities and Exchange Commission. The firm owned 451,003 shares of the oil and gas exploration company’s stock after acquiring an additional 66,904 shares during the quarter. California Public Employees Retirement System owned about 0.17% of Range Resources worth $11,162,000 at the end of the most recent reporting period.

In related news, SVP Dori Ginn sold 5,000 shares of the business’s stock in a transaction that occurred on Friday, August 26th. The stock was sold at an average price of $34.65, for a total value of $173,250.00. Following the completion of the transaction, the senior vice president now directly owns 80,801 shares in the company, valued at approximately $2,799,754.65. The sale was disclosed in a legal filing with the Securities & Exchange Commission, which is available through the SEC website. Insiders own 0.93% of the company’s stock.

Range Resources (NYSE:RRC – Get Rating) last announced its quarterly earnings results on Tuesday, October 25th. The oil and gas exploration company reported $1.37 earnings per share for the quarter, missing analysts’ consensus estimates of $1.39 by ($0.02). Range Resources had a net margin of 30.87% and a return on equity of 60.30%. The firm had revenue of $1.11 billion during the quarter, compared to analyst estimates of $1.06 billion. During the same quarter in the prior year, the business earned $0.52 earnings per share. The business’s revenue was up 267.0% on a year-over-year basis. On average, equities analysts expect that Range Resources Co. will post 4.99 earnings per share for the current year.

Want to see what other hedge funds are holding RRC? Visit HoldingsChannel.com to get the latest 13F filings and insider trades for Range Resources Co. (NYSE:RRC – Get Rating). 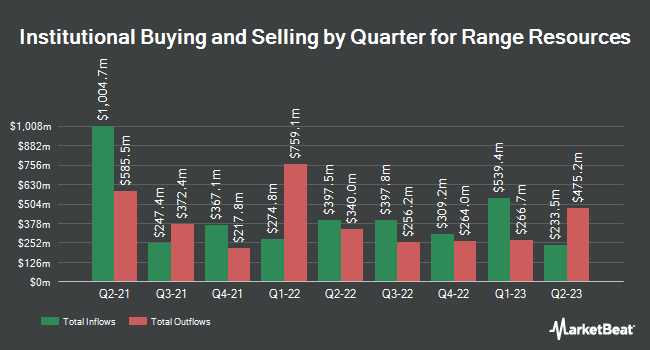