Fastenal (NASDAQ:FAST) Given Average Rating of “Hold” by Analysts

Fastenal (NASDAQ:FAST – Get Rating) has received an average recommendation of “Hold” from the eight ratings firms that are currently covering the firm, Marketbeat Ratings reports. One equities research analyst has rated the stock with a sell recommendation, six have issued a hold recommendation and one has issued a buy recommendation on the company. The average 1-year price target among analysts that have updated their coverage on the stock in the last year is $51.86.

Institutional Investors Weigh In On Fastenal

Fastenal (NASDAQ:FAST – Get Rating) last announced its quarterly earnings data on Thursday, October 13th. The company reported $0.50 EPS for the quarter, topping analysts’ consensus estimates of $0.48 by $0.02. The company had revenue of $1.80 billion during the quarter, compared to the consensus estimate of $1.78 billion. Fastenal had a net margin of 15.73% and a return on equity of 34.25%. Fastenal’s quarterly revenue was up 16.0% on a year-over-year basis. During the same quarter in the prior year, the firm earned $0.42 EPS. On average, analysts forecast that Fastenal will post 1.88 earnings per share for the current year.

The business also recently disclosed a quarterly dividend, which will be paid on Wednesday, November 23rd. Stockholders of record on Thursday, October 27th will be issued a dividend of $0.31 per share. The ex-dividend date is Wednesday, October 26th. This represents a $1.24 annualized dividend and a dividend yield of 2.38%. Fastenal’s payout ratio is currently 66.31%. 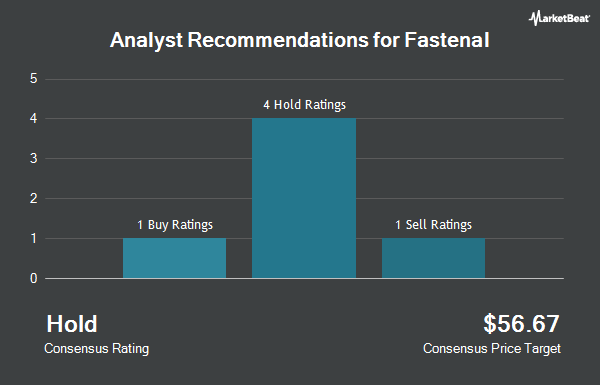