KeyCorp began coverage on shares of MongoDB (NASDAQ:MDB – Get Rating) in a report published on Monday morning, MarketBeat reports. The brokerage issued an overweight rating and a $215.00 target price on the stock.

A number of other equities research analysts also recently weighed in on MDB. Redburn Partners raised MongoDB from a sell rating to a neutral rating in a report on Tuesday, October 18th. UBS Group decreased their price target on MongoDB from $430.00 to $390.00 and set a buy rating on the stock in a research note on Thursday, September 1st. The Goldman Sachs Group dropped their price objective on MongoDB to $430.00 in a research note on Tuesday, September 6th. Morgan Stanley lowered shares of MongoDB from an overweight rating to an equal weight rating and lowered their target price for the stock from $368.00 to $215.00 in a report on Monday. Finally, Stifel Nicolaus cut their price target on shares of MongoDB from $340.00 to $320.00 and set a buy rating for the company in a report on Thursday, September 1st. Three research analysts have rated the stock with a hold rating and eighteen have issued a buy rating to the company’s stock. Based on data from MarketBeat.com, the company presently has an average rating of Moderate Buy and an average price target of $345.90.

MongoDB (NASDAQ:MDB – Get Rating) last posted its quarterly earnings results on Wednesday, August 31st. The company reported ($1.69) earnings per share for the quarter, missing analysts’ consensus estimates of ($1.52) by ($0.17). MongoDB had a negative return on equity of 52.05% and a negative net margin of 33.43%. The business had revenue of $303.66 million for the quarter, compared to analyst estimates of $282.31 million. During the same quarter in the prior year, the firm earned ($1.15) EPS. The firm’s quarterly revenue was up 52.8% on a year-over-year basis. Sell-side analysts predict that MongoDB will post -5.37 earnings per share for the current year.

Hedge Funds Weigh In On MongoDB

MongoDB, Inc provides general purpose database platform worldwide. The company offers MongoDB Enterprise Advanced, a commercial database server for enterprise customers to run in the cloud, on-premise, or in a hybrid environment; MongoDB Atlas, a hosted multi-cloud database-as-a-service solution; and Community Server, a free-to-download version of its database, which includes the functionality that developers need to get started with MongoDB. 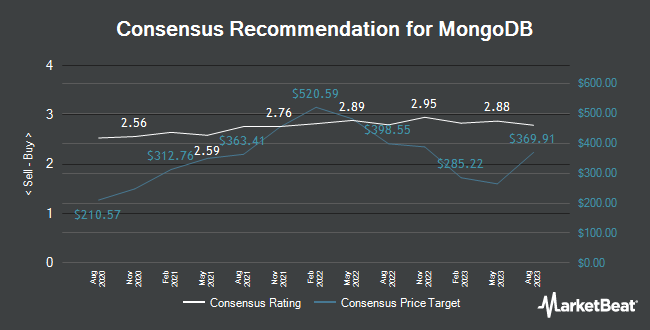 Receive News & Ratings for MongoDB Daily - Enter your email address below to receive a concise daily summary of the latest news and analysts' ratings for MongoDB and related companies with MarketBeat.com's FREE daily email newsletter.

Complete the form below to receive the latest headlines and analysts' recommendations for MongoDB with our free daily email newsletter: