Biohaven (NYSE:BHVN – Get Rating) last released its quarterly earnings results on Wednesday, November 9th. The company reported ($1.75) earnings per share (EPS) for the quarter, beating analysts’ consensus estimates of ($2.53) by $0.78. As a group, research analysts predict that Biohaven Ltd. will post -12.48 earnings per share for the current year.

Insider Buying and Selling at Biohaven

Biohaven Ltd., a clinical-stage biopharmaceutical company, focuses on discovering and developing therapies for patients with debilitating neurological and neuropsychiatric diseases in the United States. The company's pipeline products include BHV-7000, a potassium channel activator for the treatment of focal epilepsy; Troriluzole, a tripeptide prodrug that is in Phase 3 clinical trial for the treatment of neurological and neuropsychiatric illnesses; BHV-5500, a low-trapping glutamate N-methyl-D-aspartate receptor antagonist for neuropathic pain; and Verdiperstat, an irreversible myeloperoxidase enzyme inhibitor for the treatment of neurodegenerative diseases. 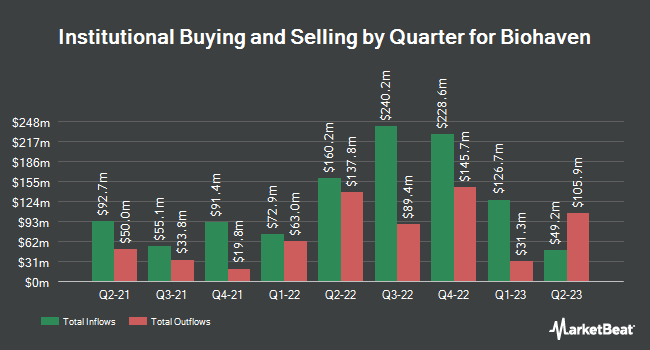 Receive News & Ratings for Biohaven Daily - Enter your email address below to receive a concise daily summary of the latest news and analysts' ratings for Biohaven and related companies with MarketBeat.com's FREE daily email newsletter.

Complete the form below to receive the latest headlines and analysts' recommendations for Biohaven with our free daily email newsletter: