ESS Tech, Inc. (NYSE:GWH – Get Rating) President Craig E. Evans sold 58,217 shares of the stock in a transaction that occurred on Monday, November 21st. The shares were sold at an average price of $3.56, for a total transaction of $207,252.52. Following the completion of the sale, the president now directly owns 5,583,400 shares in the company, valued at $19,876,904. The sale was disclosed in a filing with the SEC, which is available at this hyperlink.

ESS Tech (NYSE:GWH – Get Rating) last released its quarterly earnings data on Thursday, November 3rd. The company reported ($0.18) EPS for the quarter, hitting analysts’ consensus estimates of ($0.18). The firm had revenue of $0.19 million during the quarter, compared to analyst estimates of $1.03 million. As a group, sell-side analysts forecast that ESS Tech, Inc. will post -0.51 earnings per share for the current fiscal year.

Several brokerages have issued reports on GWH. EF Hutton Acquisition Co. I initiated coverage on shares of ESS Tech in a research report on Friday, October 28th. They set a “buy” rating and a $6.00 price objective on the stock. Chardan Capital lowered their price target on shares of ESS Tech from $5.00 to $4.50 and set a “neutral” rating for the company in a report on Friday, November 4th. Three analysts have rated the stock with a hold rating and five have issued a buy rating to the company’s stock. According to MarketBeat.com, ESS Tech currently has an average rating of “Moderate Buy” and a consensus target price of $9.78. 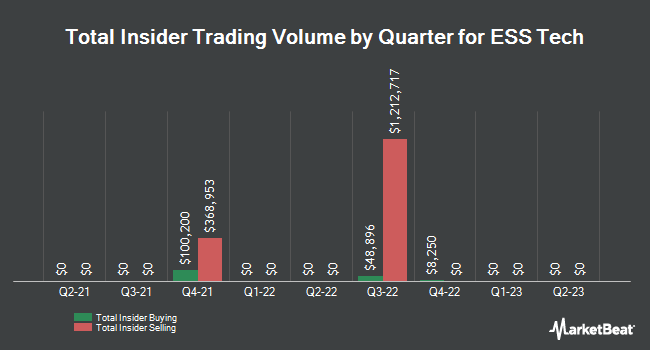 Complete the form below to receive the latest headlines and analysts' recommendations for ESS Tech with our free daily email newsletter: