Medtronic (NYSE:MDT – Get Rating) was downgraded by equities research analysts at Oppenheimer from an “outperform” rating to a “market perform” rating in a report issued on Wednesday, Marketbeat Ratings reports. They currently have a $85.00 price objective on the medical technology company’s stock, down from their prior price objective of $106.00. Oppenheimer’s target price points to a potential upside of 7.57% from the stock’s current price. Oppenheimer also issued estimates for Medtronic’s Q3 2023 earnings at $1.26 EPS, FY2023 earnings at $5.26 EPS and FY2024 earnings at $5.44 EPS.

Medtronic (NYSE:MDT – Get Rating) last released its quarterly earnings results on Tuesday, November 22nd. The medical technology company reported $1.30 earnings per share for the quarter, beating analysts’ consensus estimates of $1.28 by $0.02. Medtronic had a return on equity of 13.52% and a net margin of 14.03%. The firm had revenue of $7.59 billion during the quarter, compared to analysts’ expectations of $7.70 billion. During the same period last year, the firm posted $1.32 EPS. The business’s revenue was down 3.3% on a year-over-year basis. On average, sell-side analysts predict that Medtronic will post 5.28 EPS for the current fiscal year.

In other Medtronic news, EVP Hoedt Rob Ten sold 2,404 shares of Medtronic stock in a transaction dated Friday, October 14th. The stock was sold at an average price of $81.54, for a total transaction of $196,022.16. Following the transaction, the executive vice president now directly owns 43,483 shares in the company, valued at $3,545,603.82. The transaction was disclosed in a filing with the SEC, which is accessible through this hyperlink. Corporate insiders own 0.29% of the company’s stock. 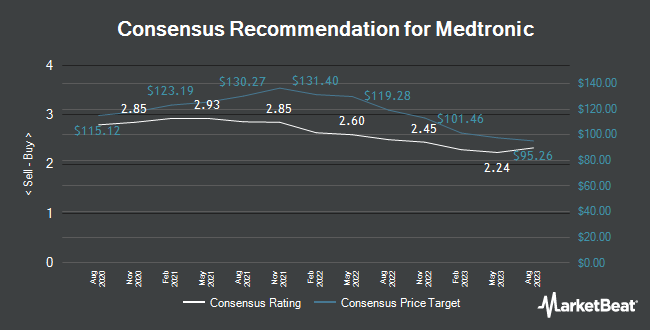 Complete the form below to receive the latest headlines and analysts' recommendations for Medtronic with our free daily email newsletter: