Shares of M&G plc (LON:MNG – Get Rating) have been given a consensus recommendation of “Hold” by the six ratings firms that are currently covering the stock, Marketbeat reports. Two investment analysts have rated the stock with a sell rating, one has given a hold rating and three have given a buy rating to the company. The average twelve-month price objective among brokers that have updated their coverage on the stock in the last year is GBX 219 ($2.59).

M&G plc, through its subsidiaries, engages in savings and investment businesses in the United Kingdom and internationally. The company operates through two segments, Asset Management, and Retail and Savings. It offers retirement, savings, and investment management solutions to its retail and institutional customers. 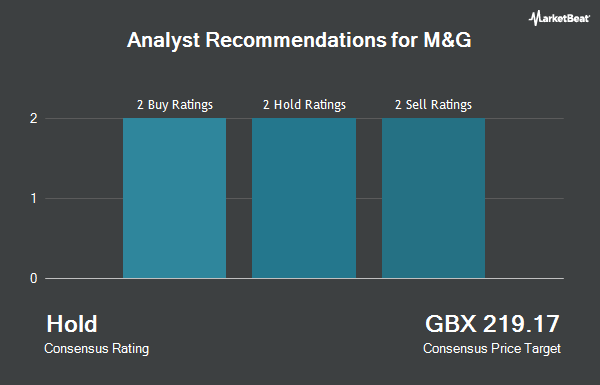 Receive News & Ratings for M&G Daily - Enter your email address below to receive a concise daily summary of the latest news and analysts' ratings for M&G and related companies with MarketBeat.com's FREE daily email newsletter.

Complete the form below to receive the latest headlines and analysts' recommendations for M&G with our free daily email newsletter: