CrowdStrike (NASDAQ:CRWD – Get Rating) had its price target cut by analysts at MKM Partners from $240.00 to $200.00 in a report released on Wednesday, MarketBeat Ratings reports. The brokerage presently has a “buy” rating on the stock. MKM Partners’ price target would suggest a potential upside of 41.95% from the stock’s previous close.

CrowdStrike (NASDAQ:CRWD – Get Rating) last posted its quarterly earnings results on Tuesday, August 30th. The company reported ($0.19) EPS for the quarter, missing the consensus estimate of ($0.17) by ($0.02). CrowdStrike had a negative net margin of 9.45% and a negative return on equity of 12.96%. The business had revenue of $535.15 million during the quarter, compared to analyst estimates of $516.44 million. During the same period last year, the firm posted ($0.21) earnings per share. The company’s quarterly revenue was up 58.5% on a year-over-year basis. On average, equities analysts forecast that CrowdStrike will post -0.76 earnings per share for the current year.

Insider Buying and Selling at CrowdStrike 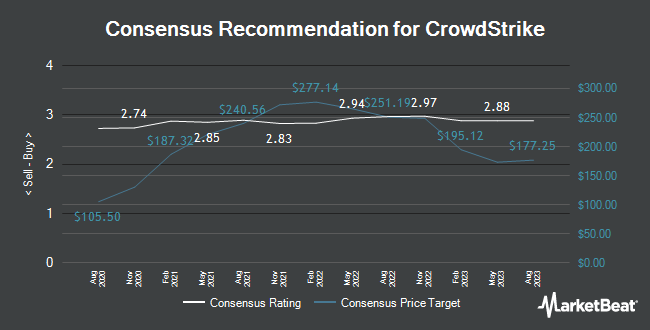