Principal Financial Group Inc. increased its holdings in shares of Arrowhead Pharmaceuticals, Inc. (NASDAQ:ARWR – Get Rating) by 14.3% in the 2nd quarter, according to the company in its most recent filing with the Securities & Exchange Commission. The fund owned 433,385 shares of the biotechnology company’s stock after buying an additional 54,310 shares during the quarter. Principal Financial Group Inc. owned 0.41% of Arrowhead Pharmaceuticals worth $15,259,000 at the end of the most recent reporting period.

In other Arrowhead Pharmaceuticals news, insider Martin Javier San sold 19,500 shares of the company’s stock in a transaction that occurred on Monday, November 21st. The shares were sold at an average price of $29.99, for a total value of $584,805.00. Following the completion of the transaction, the insider now directly owns 91,500 shares in the company, valued at $2,744,085. The transaction was disclosed in a document filed with the SEC, which is accessible through the SEC website. Insiders own 3.50% of the company’s stock.

Want to see what other hedge funds are holding ARWR? Visit HoldingsChannel.com to get the latest 13F filings and insider trades for Arrowhead Pharmaceuticals, Inc. (NASDAQ:ARWR – Get Rating). 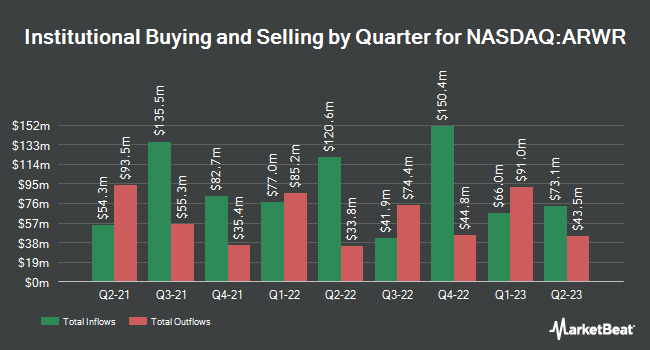 Complete the form below to receive the latest headlines and analysts' recommendations for Arrowhead Pharmaceuticals with our free daily email newsletter: