Okta (NASDAQ:OKTA – Get Rating) last announced its quarterly earnings data on Wednesday, August 31st. The company reported ($1.19) earnings per share for the quarter, topping analysts’ consensus estimates of ($1.41) by $0.22. Okta had a negative net margin of 57.21% and a negative return on equity of 13.18%. The company had revenue of $435.38 million during the quarter, compared to analyst estimates of $430.66 million. During the same period in the previous year, the business earned ($1.35) EPS. The firm’s revenue for the quarter was up 43.6% on a year-over-year basis. On average, equities analysts predict that Okta, Inc. will post -5.12 earnings per share for the current year.

Okta, Inc provides identity solutions for enterprises, small and medium-sized businesses, universities, non-profits, and government agencies in the United States and internationally. The company offers Okta Identity Cloud, a platform that offers a suite of products and services, such as Universal Directory, a cloud-based system of record to store and secure user, application, and device profiles for an organization; Single Sign-On that enables users to access applications in the cloud or on-premise from various devices; Adaptive Multi-Factor Authentication provides a layer of security for cloud, mobile, Web applications, and data; Lifecycle Management that enables IT organizations or developers to manage a user's identity throughout its lifecycle; API Access Management that enables organizations to secure APIs; Access Gateway that enables organizations to extend the Okta Identity Cloud from the cloud to their existing on-premise applications; and Advanced Server Access to secure cloud infrastructure.

Want to see what other hedge funds are holding OKTA? Visit HoldingsChannel.com to get the latest 13F filings and insider trades for Okta, Inc. (NASDAQ:OKTA – Get Rating). 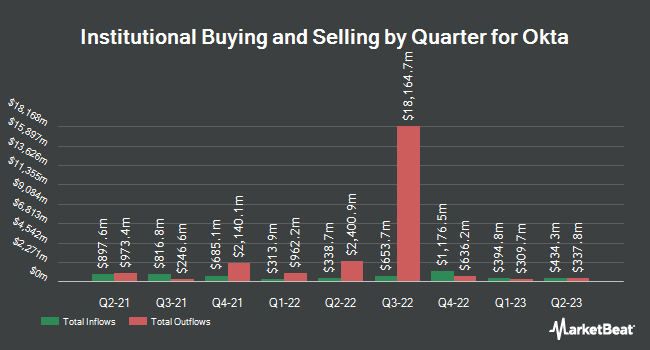 Receive News & Ratings for Okta Daily - Enter your email address below to receive a concise daily summary of the latest news and analysts' ratings for Okta and related companies with MarketBeat.com's FREE daily email newsletter.

Complete the form below to receive the latest headlines and analysts' recommendations for Okta with our free daily email newsletter: