B&G Foods (NYSE:BGS – Get Rating) last released its earnings results on Wednesday, November 9th. The company reported $0.31 earnings per share (EPS) for the quarter, meeting the consensus estimate of $0.31. The company had revenue of $528.40 million during the quarter, compared to analyst estimates of $531.32 million. B&G Foods had a positive return on equity of 8.55% and a negative net margin of 1.92%. Research analysts anticipate that B&G Foods, Inc. will post 0.96 EPS for the current fiscal year.

The firm also recently announced a quarterly dividend, which will be paid on Monday, January 30th. Stockholders of record on Friday, December 30th will be paid a dividend of $0.19 per share. This represents a $0.76 dividend on an annualized basis and a dividend yield of 6.11%. The ex-dividend date is Thursday, December 29th. B&G Foods’s payout ratio is -135.71%.

In related news, Director David L. Wenner acquired 20,000 shares of the firm’s stock in a transaction that occurred on Monday, November 14th. The stock was acquired at an average price of $14.01 per share, for a total transaction of $280,200.00. Following the completion of the acquisition, the director now owns 760,392 shares of the company’s stock, valued at approximately $10,653,091.92. The transaction was disclosed in a filing with the Securities & Exchange Commission, which can be accessed through this hyperlink. 2.70% of the stock is owned by insiders. 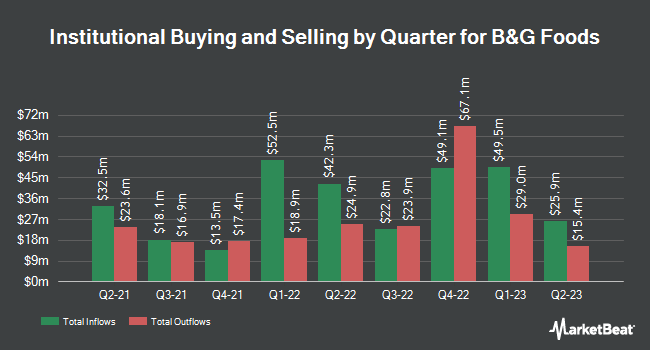 Complete the form below to receive the latest headlines and analysts' recommendations for B&G Foods with our free daily email newsletter: