Janney Montgomery Scott LLC raised its holdings in WEC Energy Group, Inc. (NYSE:WEC – Get Rating) by 3.5% during the 3rd quarter, according to the company in its most recent Form 13F filing with the Securities and Exchange Commission. The firm owned 59,086 shares of the utilities provider’s stock after purchasing an additional 1,986 shares during the period. Janney Montgomery Scott LLC’s holdings in WEC Energy Group were worth $5,284,000 at the end of the most recent quarter.

The company also recently disclosed a quarterly dividend, which will be paid on Wednesday, March 1st. Stockholders of record on Tuesday, February 14th will be paid a $0.78 dividend. The ex-dividend date is Monday, February 13th. This is a boost from WEC Energy Group’s previous quarterly dividend of $0.73. This represents a $3.12 dividend on an annualized basis and a dividend yield of 3.23%. WEC Energy Group’s payout ratio is presently 66.59%.

WEC Energy Group, Inc, through its subsidiaries, provides regulated natural gas and electricity, and renewable and nonregulated renewable energy services in the United States. The company operates through six segments: Wisconsin, Illinois, Other States, Electric Transmission, Non-Utility Energy Infrastructure, and Corporate and Other. 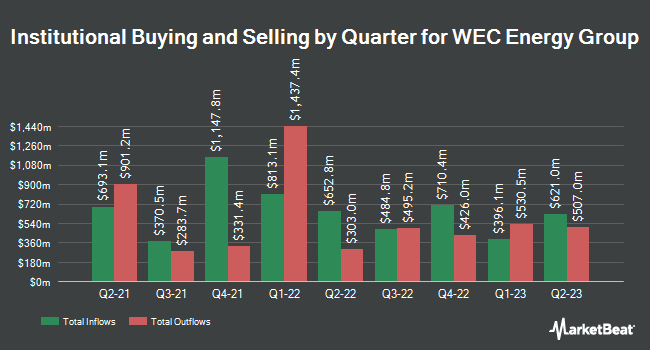 Complete the form below to receive the latest headlines and analysts' recommendations for WEC Energy Group with our free daily email newsletter: