Allspring Global Investments Holdings LLC trimmed its position in Booz Allen Hamilton Holding Co. (NYSE:BAH – Get Rating) by 5.1% during the third quarter, according to its most recent disclosure with the Securities and Exchange Commission (SEC). The fund owned 295,548 shares of the business services provider’s stock after selling 16,036 shares during the quarter. Allspring Global Investments Holdings LLC owned 0.22% of Booz Allen Hamilton worth $27,293,000 at the end of the most recent reporting period.

In other Booz Allen Hamilton news, EVP Richard Crowe sold 2,573 shares of Booz Allen Hamilton stock in a transaction on Tuesday, October 18th. The shares were sold at an average price of $100.00, for a total value of $257,300.00. Following the completion of the sale, the executive vice president now directly owns 14,278 shares of the company’s stock, valued at $1,427,800. The transaction was disclosed in a legal filing with the SEC, which is available at the SEC website. Insiders own 2.23% of the company’s stock.

The business also recently declared a quarterly dividend, which was paid on Friday, December 2nd. Shareholders of record on Tuesday, November 15th were paid a $0.43 dividend. This represents a $1.72 annualized dividend and a yield of 1.77%. The ex-dividend date of this dividend was Monday, November 14th. Booz Allen Hamilton’s dividend payout ratio (DPR) is currently 43.65%. 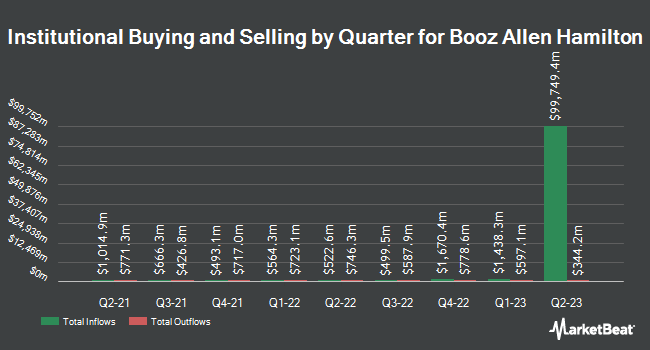 Complete the form below to receive the latest headlines and analysts' recommendations for Booz Allen Hamilton with our free daily email newsletter: