PACCAR (NASDAQ:PCAR – Get Rating) was downgraded by equities researchers at Wolfe Research from a “peer perform” rating to an “underperform” rating in a research report issued to clients and investors on Tuesday, MarketBeat.com reports.

A number of other equities analysts have also issued reports on PCAR. Raymond James increased their price objective on PACCAR from $70.00 to $80.00 and gave the stock a “strong-buy” rating in a report on Thursday, December 15th. Credit Suisse Group raised their price target on PACCAR from $69.33 to $71.33 and gave the company an “outperform” rating in a report on Wednesday, October 26th. StockNews.com downgraded shares of PACCAR from a “strong-buy” rating to a “buy” rating in a report on Wednesday, November 23rd. Exane BNP Paribas raised shares of PACCAR from an “underperform” rating to a “neutral” rating in a research note on Tuesday, November 29th. Finally, Deutsche Bank Aktiengesellschaft upped their price target on shares of PACCAR from $63.33 to $64.67 in a research note on Wednesday, October 26th. Two analysts have rated the stock with a sell rating, seven have assigned a hold rating, four have given a buy rating and one has issued a strong buy rating to the stock. Based on data from MarketBeat.com, the stock presently has a consensus rating of “Hold” and a consensus price target of $65.48.

Shares of PACCAR are set to split on Wednesday, March 8th. The 3-2 split was announced on Tuesday, December 6th. The newly created shares will be payable to shareholders after the closing bell on Tuesday, March 7th.

PACCAR (NASDAQ:PCAR – Get Rating) last announced its quarterly earnings results on Tuesday, October 25th. The company reported $1.47 earnings per share (EPS) for the quarter, beating the consensus estimate of $1.34 by $0.13. PACCAR had a net margin of 9.50% and a return on equity of 21.24%. The company had revenue of $6.69 billion during the quarter, compared to the consensus estimate of $6.65 billion. During the same quarter in the previous year, the company posted $0.72 earnings per share. The company’s revenue for the quarter was up 41.1% compared to the same quarter last year. As a group, equities research analysts forecast that PACCAR will post 8.16 earnings per share for the current year.

Insider Buying and Selling at PACCAR

Hedge Funds Weigh In On PACCAR 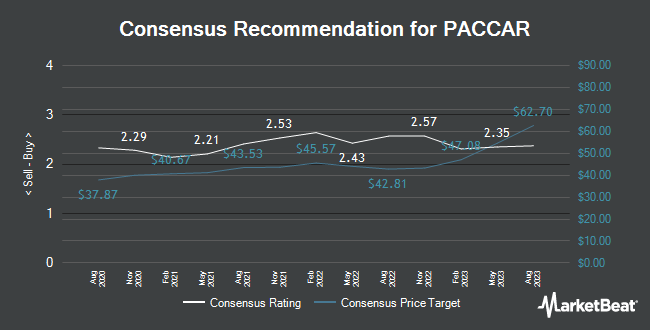