CSX (NASDAQ:CSX – Get Rating) had its target price lifted by investment analysts at Morgan Stanley from $23.00 to $24.00 in a research report issued to clients and investors on Wednesday, Benzinga reports. The firm currently has an “underweight” rating on the transportation company’s stock. Morgan Stanley’s price target suggests a potential downside of 26.13% from the stock’s current price.

CSX (NASDAQ:CSX – Get Rating) last announced its quarterly earnings results on Thursday, October 20th. The transportation company reported $0.52 EPS for the quarter, beating the consensus estimate of $0.49 by $0.03. The firm had revenue of $3.90 billion for the quarter, compared to analyst estimates of $3.75 billion. CSX had a return on equity of 30.32% and a net margin of 28.06%. The business’s revenue for the quarter was up 18.5% on a year-over-year basis. During the same quarter last year, the firm posted $0.43 earnings per share. On average, equities research analysts expect that CSX will post 1.9 earnings per share for the current fiscal year.

CSX Corporation, together with its subsidiaries, provides rail-based freight transportation services. The company offers rail services; and transportation of intermodal containers and trailers, as well as other transportation services, such as rail-to-truck transfers and bulk commodity operations. It transports chemicals, agricultural and food products, automotive, minerals, forest products, fertilizers, and metals and equipment; and coal, coke, and iron ore to electricity-generating power plants, steel manufacturers, and industrial plants, as well as exports coal to deep-water port facilities. 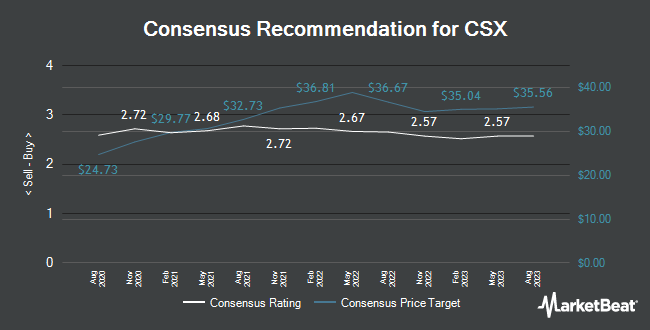 Receive News & Ratings for CSX Daily - Enter your email address below to receive a concise daily summary of the latest news and analysts' ratings for CSX and related companies with MarketBeat.com's FREE daily email newsletter.

Complete the form below to receive the latest headlines and analysts' recommendations for CSX with our free daily email newsletter: