PulteGroup (NYSE:PHM) Rating Increased to Buy at Bank of America

PulteGroup (NYSE:PHM – Get Rating) was upgraded by research analysts at Bank of America from a “neutral” rating to a “buy” rating in a report released on Wednesday, MarketBeat reports. The brokerage currently has a $60.00 price objective on the construction company’s stock, up from their prior price objective of $46.00. Bank of America‘s price target would suggest a potential upside of 19.26% from the company’s current price.

PulteGroup (NYSE:PHM – Get Rating) last released its earnings results on Tuesday, October 25th. The construction company reported $2.69 earnings per share (EPS) for the quarter, missing the consensus estimate of $2.73 by ($0.04). The firm had revenue of $3.94 billion during the quarter, compared to analyst estimates of $4.04 billion. PulteGroup had a net margin of 15.56% and a return on equity of 30.80%. Sell-side analysts forecast that PulteGroup will post 10.14 EPS for the current year.

Institutional Investors Weigh In On PulteGroup

PulteGroup, Inc, through its subsidiaries, primarily engages in the homebuilding business in the United States. It acquires and develops land primarily for residential purposes; and constructs housing on such land. The company also offers various home designs, including single-family detached, townhomes, condominiums, and duplexes under the Centex, Pulte Homes, Del Webb, DiVosta Homes, American West, and John Wieland Homes and Neighborhoods brand names. 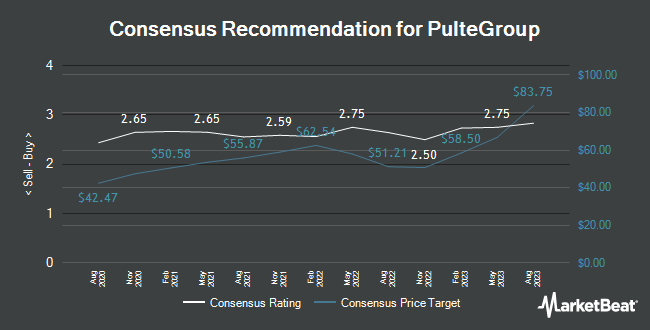 Complete the form below to receive the latest headlines and analysts' recommendations for PulteGroup with our free daily email newsletter: