State of Alaska Department of Revenue Has $524,000 Stake in Louisiana-Pacific Co. (NYSE:LPX)

State of Alaska Department of Revenue trimmed its holdings in Louisiana-Pacific Co. (NYSE:LPX – Get Rating) by 70.1% in the third quarter, according to the company in its most recent Form 13F filing with the Securities & Exchange Commission. The fund owned 10,244 shares of the building manufacturing company’s stock after selling 24,038 shares during the period. State of Alaska Department of Revenue’s holdings in Louisiana-Pacific were worth $524,000 at the end of the most recent quarter.

Louisiana-Pacific (NYSE:LPX – Get Rating) last issued its quarterly earnings results on Tuesday, November 1st. The building manufacturing company reported $1.72 earnings per share (EPS) for the quarter, beating the consensus estimate of $1.62 by $0.10. Louisiana-Pacific had a return on equity of 77.64% and a net margin of 29.88%. The company had revenue of $852.00 million for the quarter, compared to analyst estimates of $847.81 million. As a group, research analysts expect that Louisiana-Pacific Co. will post 12.02 EPS for the current fiscal year.

The firm also recently declared a quarterly dividend, which was paid on Thursday, December 1st. Stockholders of record on Wednesday, November 9th were paid a $0.22 dividend. The ex-dividend date was Tuesday, November 8th. This represents a $0.88 annualized dividend and a dividend yield of 1.38%. Louisiana-Pacific’s payout ratio is 5.65%.

In other news, Director Lizanne C. Gottung sold 3,587 shares of Louisiana-Pacific stock in a transaction on Thursday, December 15th. The stock was sold at an average price of $62.52, for a total value of $224,259.24. Following the transaction, the director now owns 27,470 shares in the company, valued at approximately $1,717,424.40. The sale was disclosed in a filing with the SEC, which is available at the SEC website. Corporate insiders own 1.26% of the company’s stock.

Louisiana-Pacific Corporation, together with its subsidiaries, manufactures and markets building products primarily for use in new home construction, repair and remodeling, and outdoor structure markets. It operates through four segments: Siding; Oriented Strand Board (OSB); Engineered Wood Products (EWP); and South America. 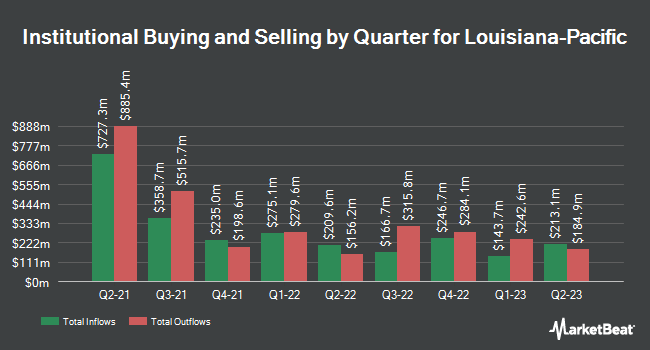 Complete the form below to receive the latest headlines and analysts' recommendations for Louisiana-Pacific with our free daily email newsletter: