Victory Capital Holdings, Inc. (NASDAQ:VCTR – Get Rating) has earned an average recommendation of “Hold” from the ten brokerages that are currently covering the stock, Marketbeat Ratings reports. Two research analysts have rated the stock with a sell rating, two have issued a hold rating and five have assigned a buy rating to the company. The average 12-month price objective among analysts that have updated their coverage on the stock in the last year is $30.00.

Victory Capital (NASDAQ:VCTR – Get Rating) last posted its earnings results on Thursday, November 3rd. The company reported $1.16 earnings per share for the quarter, beating the consensus estimate of $1.07 by $0.09. The company had revenue of $207.26 million for the quarter, compared to analyst estimates of $206.64 million. Victory Capital had a return on equity of 33.15% and a net margin of 33.20%. On average, research analysts forecast that Victory Capital will post 4.45 earnings per share for the current year.

The business also recently disclosed a quarterly dividend, which was paid on Friday, December 23rd. Stockholders of record on Friday, December 9th were paid a $0.25 dividend. The ex-dividend date was Thursday, December 8th. This represents a $1.00 annualized dividend and a dividend yield of 3.39%. Victory Capital’s dividend payout ratio is currently 24.94%.

In other Victory Capital news, CEO David Craig Brown purchased 40,000 shares of the firm’s stock in a transaction that occurred on Thursday, December 15th. The shares were acquired at an average cost of $27.01 per share, for a total transaction of $1,080,400.00. Following the transaction, the chief executive officer now directly owns 2,208,137 shares in the company, valued at $59,641,780.37. The purchase was disclosed in a document filed with the Securities & Exchange Commission, which is accessible through this link. 10.80% of the stock is owned by corporate insiders. 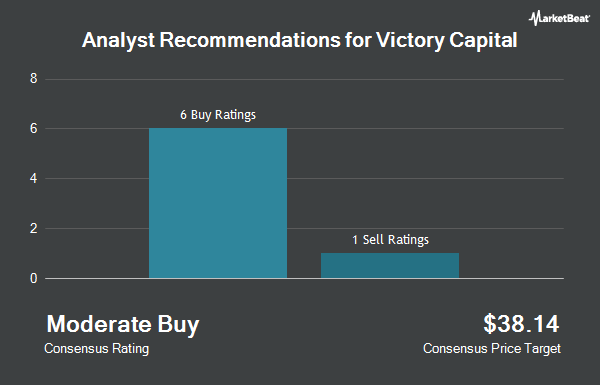