Shares of Cronos Group Inc. (NASDAQ:CRON – Get Rating) have been given an average recommendation of “Hold” by the nine ratings firms that are covering the company, MarketBeat.com reports. Four research analysts have rated the stock with a hold recommendation and three have given a buy recommendation to the company. The average 1 year price objective among brokerages that have issued ratings on the stock in the last year is $4.07.

Cronos Group (NASDAQ:CRON – Get Rating) last announced its quarterly earnings data on Monday, November 7th. The company reported ($0.07) earnings per share for the quarter, missing the consensus estimate of ($0.06) by ($0.01). The company had revenue of $20.92 million for the quarter, compared to analysts’ expectations of $23.30 million. Cronos Group had a negative return on equity of 16.29% and a negative net margin of 235.72%. Analysts expect that Cronos Group will post -0.29 earnings per share for the current fiscal year.

Cronos Group Inc operates as a cannabinoid company. It manufactures, markets, and distributes hemp-derived supplements and cosmetic products through e-commerce, retail, and hospitality partner channels under the Lord Jones and Happy Dance brands in the United States. The company is also involved in the cultivation, manufacture, and marketing of cannabis and cannabis-derived products for the medical and adult-use markets. 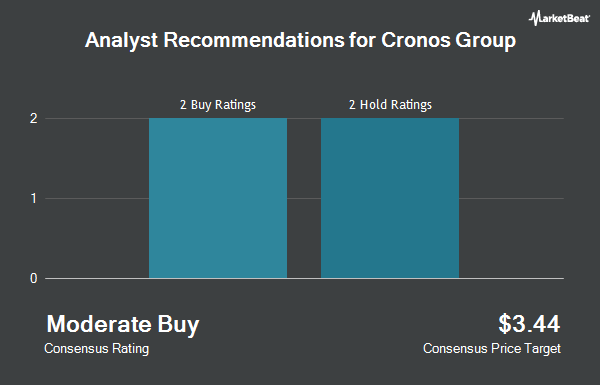 Complete the form below to receive the latest headlines and analysts' recommendations for Cronos Group with our free daily email newsletter: