Mercury Systems (NASDAQ:MRCY – Get Rating) was upgraded by equities researchers at StockNews.com from a “sell” rating to a “hold” rating in a research note issued to investors on Saturday.

Other equities research analysts also recently issued research reports about the company. The Goldman Sachs Group cut their price objective on Mercury Systems from $57.00 to $54.00 and set a “neutral” rating for the company in a report on Thursday, October 13th. Royal Bank of Canada downgraded Mercury Systems from an “outperform” rating to a “sector perform” rating and cut their price objective for the company from $66.00 to $54.00 in a report on Friday, December 16th. Finally, Raymond James assumed coverage on Mercury Systems in a report on Thursday, October 27th. They issued an “outperform” rating and a $55.00 price objective for the company. Four research analysts have rated the stock with a hold rating and five have issued a buy rating to the stock. Based on data from MarketBeat.com, the company presently has a consensus rating of “Moderate Buy” and an average target price of $61.63.

Mercury Systems (NASDAQ:MRCY – Get Rating) last issued its quarterly earnings results on Tuesday, November 1st. The technology company reported $0.11 earnings per share for the quarter, topping the consensus estimate of ($0.01) by $0.12. The company had revenue of $227.58 million during the quarter, compared to analysts’ expectations of $218.40 million. Mercury Systems had a net margin of 0.41% and a return on equity of 5.51%. As a group, equities research analysts forecast that Mercury Systems will post 1.28 EPS for the current fiscal year.

Mercury Systems, Inc, a technology company, manufactures and sells components, products, modules, and subsystems for aerospace and defense industries in the United States, Europe, and the Asia Pacific. Its products and solutions are deployed in approximately 300 programs with 25 defense contractors and commercial aviation customers. 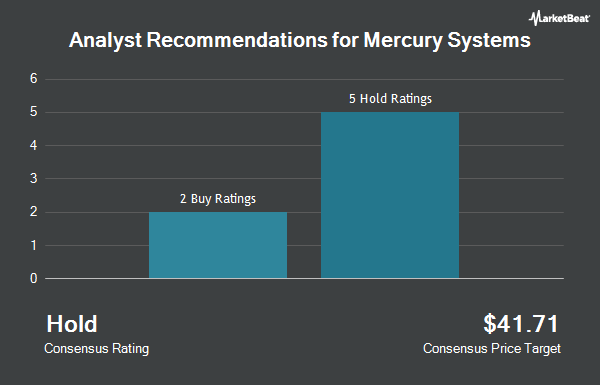