PENN Entertainment (NASDAQ:PENN – Get Rating) had its target price cut by Truist Financial from $40.00 to $36.00 in a report published on Wednesday, The Fly reports.

In other news, CEO Jay A. Snowden sold 163,475 shares of the stock in a transaction that occurred on Tuesday, December 27th. The stock was sold at an average price of $30.12, for a total transaction of $4,923,867.00. Following the sale, the chief executive officer now directly owns 604,527 shares in the company, valued at approximately $18,208,353.24. The sale was disclosed in a legal filing with the Securities & Exchange Commission, which can be accessed through the SEC website. Insiders own 1.50% of the company’s stock.

PENN Entertainment, Inc, together with its subsidiaries, provides integrated entertainment, sports content, and casino gaming experiences in North America. The company operates through five segments: Northeast, South, West, Midwest, and Interactive. It operates 44 properties in 20 states; online sports betting in 13 jurisdictions; and iCasino in five under a portfolio of brands, including Hollywood Casino, L'Auberge, Barstool Sportsbook, and theScore Bet. 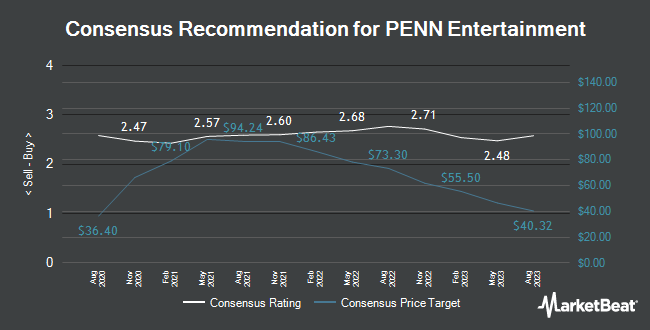 Complete the form below to receive the latest headlines and analysts' recommendations for PENN Entertainment with our free daily email newsletter: