Raymond James Trust N.A. increased its holdings in shares of AGCO Co. (NYSE:AGCO – Get Rating) by 3.9% in the third quarter, according to its most recent filing with the SEC. The fund owned 4,751 shares of the industrial products company’s stock after acquiring an additional 180 shares during the period. Raymond James Trust N.A.’s holdings in AGCO were worth $457,000 at the end of the most recent quarter.

Insider Buying and Selling at AGCO

In other AGCO news, Director George E. Minnich sold 1,500 shares of the firm’s stock in a transaction dated Wednesday, November 16th. The shares were sold at an average price of $123.70, for a total value of $185,550.00. Following the completion of the sale, the director now owns 12,543 shares in the company, valued at approximately $1,551,569.10. The transaction was disclosed in a filing with the Securities & Exchange Commission, which is available at this hyperlink. Insiders own 17.40% of the company’s stock.

A number of equities analysts recently weighed in on AGCO shares. Stifel Nicolaus reduced their price target on AGCO from $170.00 to $150.00 and set a “buy” rating for the company in a report on Wednesday, September 28th. JPMorgan Chase & Co. boosted their price objective on AGCO from $135.00 to $155.00 and gave the stock an “overweight” rating in a research note on Tuesday, December 13th. Robert W. Baird initiated coverage on AGCO in a research report on Tuesday, September 27th. They issued an “outperform” rating and a $156.00 price target for the company. Citigroup increased their price objective on AGCO to $150.00 in a research report on Wednesday, December 14th. Finally, Deutsche Bank Aktiengesellschaft lowered their price objective on AGCO from $137.00 to $129.00 in a research report on Wednesday, November 2nd. Two research analysts have rated the stock with a hold rating and eight have assigned a buy rating to the company. According to data from MarketBeat.com, the stock has an average rating of “Moderate Buy” and a consensus target price of $151.90.

AGCO (NYSE:AGCO – Get Rating) last announced its quarterly earnings data on Tuesday, November 1st. The industrial products company reported $3.18 earnings per share for the quarter, beating analysts’ consensus estimates of $3.12 by $0.06. AGCO had a net margin of 7.13% and a return on equity of 23.61%. The business had revenue of $3.10 billion during the quarter, compared to the consensus estimate of $3.30 billion. During the same quarter in the prior year, the firm earned $2.41 EPS. The company’s revenue for the quarter was up 13.8% compared to the same quarter last year. On average, analysts anticipate that AGCO Co. will post 11.85 EPS for the current year.

The company also recently announced a quarterly dividend, which was paid on Thursday, December 15th. Investors of record on Tuesday, November 15th were paid a $0.24 dividend. The ex-dividend date of this dividend was Monday, November 14th. This represents a $0.96 dividend on an annualized basis and a yield of 0.68%. AGCO’s payout ratio is presently 8.47%.

AGCO Corp. engages in the manufacture and distribution of agricultural equipment and related replacement parts. It operates through the following geographic segments: North America, South America, Europe and Middle East, and Asia, Pacific, and Africa. The Asia/Pacific/Africa segment includes the regions of Australia and New Zealand.

Want to see what other hedge funds are holding AGCO? Visit HoldingsChannel.com to get the latest 13F filings and insider trades for AGCO Co. (NYSE:AGCO – Get Rating). 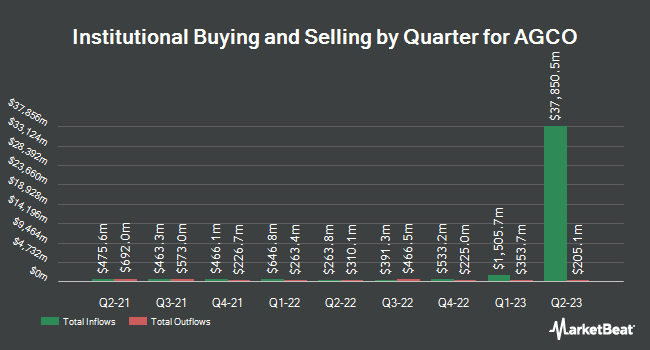 Receive News & Ratings for AGCO Daily - Enter your email address below to receive a concise daily summary of the latest news and analysts' ratings for AGCO and related companies with MarketBeat.com's FREE daily email newsletter.

Complete the form below to receive the latest headlines and analysts' recommendations for AGCO with our free daily email newsletter: