Raytheon Technologies (NYSE:RTX – Get Rating) was downgraded by stock analysts at The Goldman Sachs Group from a “buy” rating to a “neutral” rating in a report released on Friday, Marketbeat.com reports. They currently have a $105.00 price target on the stock, down from their prior price target of $115.00. The Goldman Sachs Group’s target price would indicate a potential upside of 6.40% from the stock’s previous close.

Raytheon Technologies (NYSE:RTX – Get Rating) last announced its earnings results on Tuesday, October 25th. The company reported $1.21 earnings per share for the quarter, topping analysts’ consensus estimates of $1.11 by $0.10. The business had revenue of $16.95 billion for the quarter, compared to analyst estimates of $17.25 billion. Raytheon Technologies had a return on equity of 9.36% and a net margin of 6.76%. The company’s quarterly revenue was up 4.6% compared to the same quarter last year. During the same period in the prior year, the company earned $1.26 EPS. As a group, equities analysts anticipate that Raytheon Technologies will post 4.76 EPS for the current fiscal year. 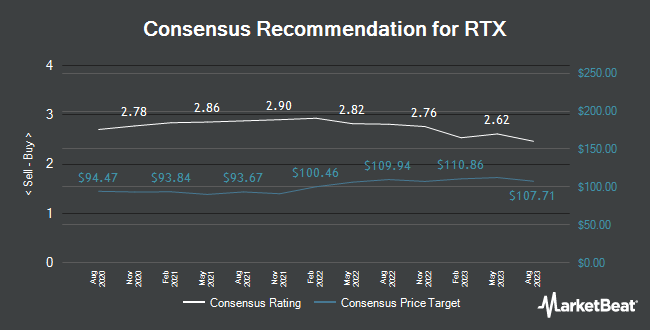