FTAI has been the topic of a number of analyst reports. Compass Point lowered their target price on shares of FTAI Aviation from $39.00 to $31.00 and set a “buy” rating on the stock in a research note on Wednesday, September 21st. StockNews.com assumed coverage on shares of FTAI Aviation in a report on Wednesday, October 12th. They issued a “sell” rating on the stock. Finally, Barclays lifted their price target on shares of FTAI Aviation from $20.00 to $22.00 and gave the company an “overweight” rating in a report on Wednesday, January 11th. One analyst has rated the stock with a sell rating and four have issued a buy rating to the company. According to data from MarketBeat, the stock has a consensus rating of “Moderate Buy” and a consensus price target of $26.38.

FTAI Aviation (NYSE:FTAI – Get Rating) last posted its earnings results on Thursday, October 27th. The financial services provider reported $0.05 earnings per share for the quarter, missing analysts’ consensus estimates of $0.57 by ($0.52). FTAI Aviation had a negative return on equity of 6.79% and a negative net margin of 34.65%. The business had revenue of $230.37 million during the quarter, compared to the consensus estimate of $155.11 million. As a group, sell-side analysts expect that FTAI Aviation Ltd. will post -0.9 earnings per share for the current fiscal year.

In other news, CEO Joseph P. Jr. Adams purchased 25,000 shares of the business’s stock in a transaction that occurred on Wednesday, November 9th. The shares were bought at an average cost of $18.00 per share, for a total transaction of $450,000.00. Following the acquisition, the chief executive officer now owns 187,616 shares of the company’s stock, valued at approximately $3,377,088. The purchase was disclosed in a legal filing with the Securities & Exchange Commission, which can be accessed through the SEC website. 1.30% of the stock is currently owned by insiders.

FTAI Aviation Ltd. owns and acquires infrastructure and related equipment for the transportation of goods and people worldwide. It operates through two segments, Aviation Leasing and Aerospace Products. The Aviation Leasing segment owns and manages aviation assets, including aircraft and aircraft engines, which it leases and sells to customers. 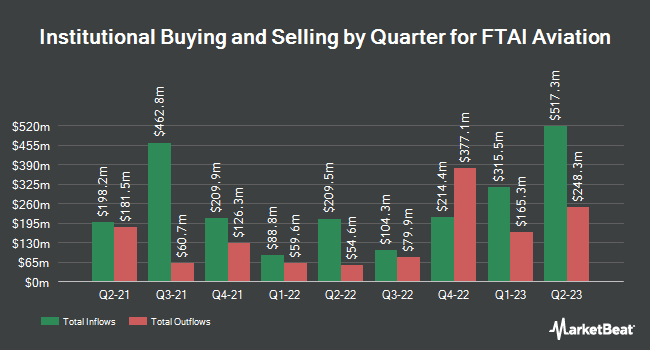 Complete the form below to receive the latest headlines and analysts' recommendations for FTAI Aviation with our free daily email newsletter: