Mn Services Vermogensbeheer B.V. trimmed its position in Bentley Systems, Incorporated (NASDAQ:BSY – Get Rating) by 5.5% during the third quarter, according to the company in its most recent 13F filing with the Securities and Exchange Commission (SEC). The firm owned 105,900 shares of the company’s stock after selling 6,200 shares during the quarter. Mn Services Vermogensbeheer B.V.’s holdings in Bentley Systems were worth $3,239,000 at the end of the most recent quarter.

Bentley Systems (NASDAQ:BSY – Get Rating) last released its quarterly earnings data on Tuesday, November 8th. The company reported $0.14 earnings per share (EPS) for the quarter, beating analysts’ consensus estimates of $0.13 by $0.01. Bentley Systems had a return on equity of 49.27% and a net margin of 17.37%. The business had revenue of $268.33 million during the quarter, compared to analyst estimates of $268.93 million. As a group, analysts forecast that Bentley Systems, Incorporated will post 0.65 EPS for the current year.

The business also recently disclosed a quarterly dividend, which was paid on Thursday, December 8th. Investors of record on Wednesday, November 30th were given a dividend of $0.03 per share. The ex-dividend date was Tuesday, November 29th. This represents a $0.12 dividend on an annualized basis and a yield of 0.32%. Bentley Systems’s dividend payout ratio is currently 20.34%. 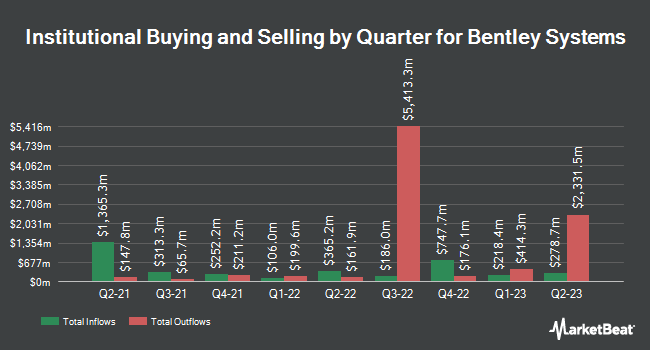