Strs Ohio increased its position in shares of Ingles Markets, Incorporated (NASDAQ:IMKTA – Get Rating) by 4.3% during the 3rd quarter, according to its most recent disclosure with the Securities and Exchange Commission (SEC). The fund owned 9,800 shares of the company’s stock after purchasing an additional 400 shares during the quarter. Strs Ohio owned 0.05% of Ingles Markets worth $776,000 at the end of the most recent reporting period.

Separately, StockNews.com initiated coverage on Ingles Markets in a research report on Wednesday, October 12th. They issued a “strong-buy” rating on the stock.

The firm also recently declared a quarterly dividend, which was paid on Thursday, January 12th. Stockholders of record on Friday, January 6th were issued a dividend of $0.165 per share. This represents a $0.66 dividend on an annualized basis and a dividend yield of 0.68%. The ex-dividend date was Thursday, January 5th. Ingles Markets’s dividend payout ratio (DPR) is 4.60%.

Ingles Markets, Incorporated operates a chain of supermarkets in the southeast United States. It offers food products, including grocery, meat and dairy products, produce, frozen foods, and other perishables; and non-food products, which include fuel centers, pharmacies, health and beauty care products, and general merchandise, as well as private label items. 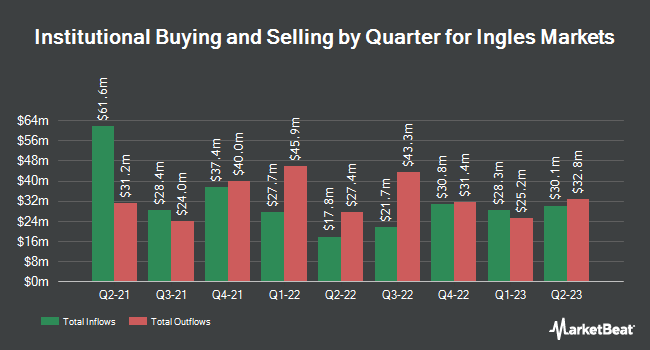 Complete the form below to receive the latest headlines and analysts' recommendations for Ingles Markets with our free daily email newsletter: