PPL (NYSE:PPL – Get Rating) last issued its earnings results on Friday, November 4th. The utilities provider reported $0.41 earnings per share (EPS) for the quarter, hitting the consensus estimate of $0.41. PPL had a net margin of 9.86% and a return on equity of 7.19%. The firm had revenue of $2.13 billion for the quarter, compared to analysts’ expectations of $1.66 billion. As a group, analysts predict that PPL Co. will post 1.39 earnings per share for the current year.

The company also recently announced a quarterly dividend, which was paid on Tuesday, January 3rd. Stockholders of record on Friday, December 9th were issued a dividend of $0.225 per share. The ex-dividend date of this dividend was Thursday, December 8th. This represents a $0.90 dividend on an annualized basis and a dividend yield of 2.94%. PPL’s dividend payout ratio is currently 94.74%.

In related news, insider David J. Bonenberger sold 29,080 shares of the business’s stock in a transaction dated Wednesday, January 4th. The stock was sold at an average price of $30.00, for a total transaction of $872,400.00. Following the transaction, the insider now owns 34,606 shares in the company, valued at approximately $1,038,180. The sale was disclosed in a document filed with the SEC, which can be accessed through the SEC website. 0.17% of the stock is currently owned by company insiders.

Want to see what other hedge funds are holding PPL? Visit HoldingsChannel.com to get the latest 13F filings and insider trades for PPL Co. (NYSE:PPL – Get Rating). 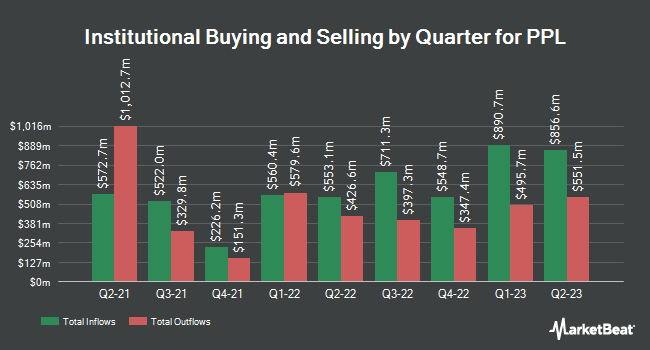