Comerica Bank decreased its position in Markel Co. (NYSE:MKL – Get Rating) by 3.1% during the 3rd quarter, according to the company in its most recent disclosure with the Securities and Exchange Commission. The fund owned 2,350 shares of the insurance provider’s stock after selling 76 shares during the period. Comerica Bank’s holdings in Markel were worth $2,697,000 as of its most recent SEC filing.

Markel (NYSE:MKL – Get Rating) last released its earnings results on Tuesday, November 1st. The insurance provider reported $13.17 EPS for the quarter, missing analysts’ consensus estimates of $17.66 by ($4.49). The firm had revenue of $3.35 billion during the quarter, compared to the consensus estimate of $3.21 billion. Markel had a negative net margin of 0.29% and a positive return on equity of 6.44%. As a group, research analysts expect that Markel Co. will post 65.44 earnings per share for the current fiscal year.

In other news, CEO Thomas Sinnickson Gayner bought 50 shares of Markel stock in a transaction that occurred on Tuesday, November 8th. The shares were acquired at an average price of $1,230.60 per share, with a total value of $61,530.00. Following the completion of the purchase, the chief executive officer now directly owns 42,127 shares in the company, valued at $51,841,486.20. The purchase was disclosed in a legal filing with the Securities & Exchange Commission, which is available at this link. 1.74% of the stock is owned by insiders. 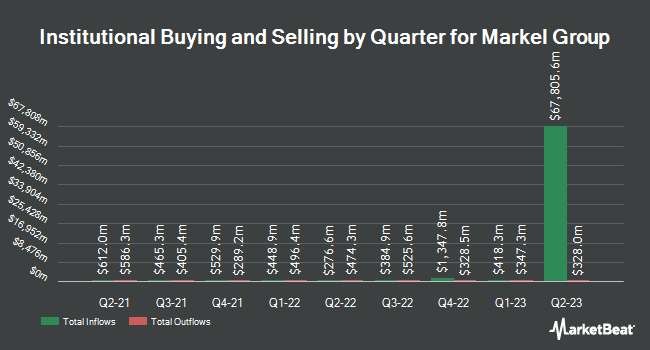 Receive News & Ratings for Markel Daily - Enter your email address below to receive a concise daily summary of the latest news and analysts' ratings for Markel and related companies with MarketBeat.com's FREE daily email newsletter.

Complete the form below to receive the latest headlines and analysts' recommendations for Markel with our free daily email newsletter: