Cwm LLC cut its stake in MarketAxess Holdings Inc. (NASDAQ:MKTX – Get Rating) by 33.8% during the 3rd quarter, according to its most recent Form 13F filing with the Securities and Exchange Commission (SEC). The institutional investor owned 427 shares of the financial services provider’s stock after selling 218 shares during the period. Cwm LLC’s holdings in MarketAxess were worth $95,000 at the end of the most recent reporting period.

MarketAxess (NASDAQ:MKTX – Get Rating) last announced its earnings results on Wednesday, October 19th. The financial services provider reported $1.58 earnings per share (EPS) for the quarter, beating analysts’ consensus estimates of $1.49 by $0.09. The firm had revenue of $172.10 million during the quarter, compared to analyst estimates of $172.41 million. MarketAxess had a net margin of 34.47% and a return on equity of 23.89%. MarketAxess’s revenue was up 6.2% compared to the same quarter last year. During the same quarter in the prior year, the firm posted $1.52 EPS. On average, equities analysts expect that MarketAxess Holdings Inc. will post 6.61 EPS for the current year.

MarketAxess Holdings, Inc operates as an electronic trading platform that allows investment industry professionals to trade corporate bonds and other types of fixed-income instruments. It also provides data and analytical tools that help its clients to make trading decisions and facilitate the trading process by electronically communicating order information between trading counterparties.

Want to see what other hedge funds are holding MKTX? Visit HoldingsChannel.com to get the latest 13F filings and insider trades for MarketAxess Holdings Inc. (NASDAQ:MKTX – Get Rating). 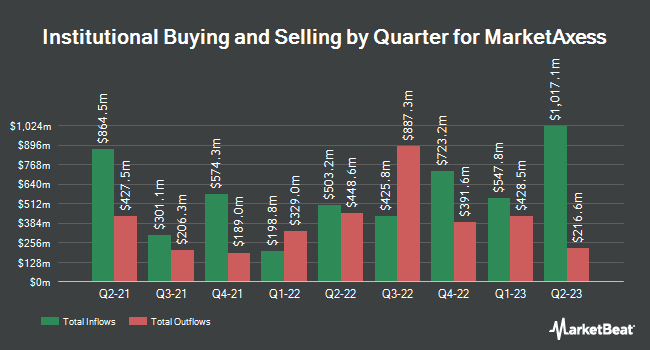