New York State Teachers Retirement System boosted its position in shares of Kennametal Inc. (NYSE:KMT – Get Rating) by 6.9% in the third quarter, according to the company in its most recent disclosure with the SEC. The firm owned 126,261 shares of the industrial products company’s stock after purchasing an additional 8,131 shares during the quarter. New York State Teachers Retirement System owned 0.15% of Kennametal worth $2,598,000 as of its most recent SEC filing.

Kennametal (NYSE:KMT – Get Rating) last announced its earnings results on Monday, October 31st. The industrial products company reported $0.34 EPS for the quarter, missing the consensus estimate of $0.37 by ($0.03). Kennametal had a return on equity of 10.69% and a net margin of 6.75%. The business had revenue of $494.79 million for the quarter, compared to analyst estimates of $488.06 million. During the same quarter in the previous year, the company posted $0.44 EPS. The business’s revenue for the quarter was up 2.3% compared to the same quarter last year. Research analysts forecast that Kennametal Inc. will post 1.5 EPS for the current fiscal year.

Kennametal Inc engages in development and application of tungsten carbides, ceramics, and super-hard materials and solutions for use in metal cutting and extreme wear applications to enable customers work against corrosion and high temperatures conditions worldwide. The company operates through two segments, Metal Cutting and Infrastructure.

Want to see what other hedge funds are holding KMT? Visit HoldingsChannel.com to get the latest 13F filings and insider trades for Kennametal Inc. (NYSE:KMT – Get Rating). 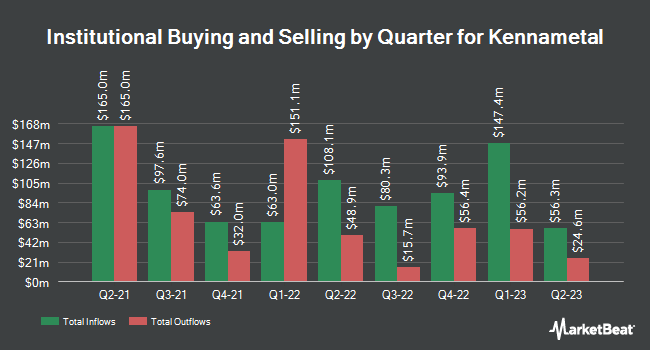 Olin Co. Given Average Rating of “Moderate Buy” by Analysts