Raymond James Financial Services Advisors Inc. cut its stake in C.H. Robinson Worldwide, Inc. (NASDAQ:CHRW – Get Rating) by 12.3% in the 3rd quarter, according to its most recent disclosure with the SEC. The institutional investor owned 18,514 shares of the transportation company’s stock after selling 2,602 shares during the period. Raymond James Financial Services Advisors Inc.’s holdings in C.H. Robinson Worldwide were worth $1,783,000 as of its most recent SEC filing.

In related news, insider Jordan T. Kass sold 5,276 shares of the firm’s stock in a transaction that occurred on Tuesday, November 29th. The shares were sold at an average price of $97.73, for a total transaction of $515,623.48. Following the completion of the sale, the insider now owns 45,603 shares of the company’s stock, valued at $4,456,781.19. The sale was disclosed in a legal filing with the Securities & Exchange Commission, which is available through this hyperlink. 1.64% of the stock is owned by insiders.

The company also recently declared a quarterly dividend, which was paid on Tuesday, January 3rd. Investors of record on Friday, December 2nd were given a dividend of $0.61 per share. The ex-dividend date of this dividend was Thursday, December 1st. This represents a $2.44 annualized dividend and a dividend yield of 2.63%. This is an increase from C.H. Robinson Worldwide’s previous quarterly dividend of $0.55. C.H. Robinson Worldwide’s dividend payout ratio (DPR) is 29.61%. 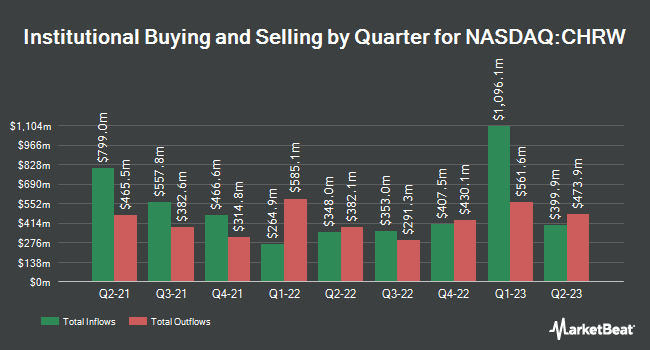 Complete the form below to receive the latest headlines and analysts' recommendations for C.H. Robinson Worldwide with our free daily email newsletter: