SPX Technologies (NYSE:SPXC – Get Rating) last announced its earnings results on Thursday, November 3rd. The company reported $0.81 earnings per share for the quarter, beating the consensus estimate of $0.66 by $0.15. SPX Technologies had a return on equity of 11.87% and a net margin of 2.45%. The company had revenue of $370.50 million for the quarter, compared to the consensus estimate of $352.00 million. Equities analysts forecast that SPX Technologies, Inc. will post 2.91 EPS for the current year.

In related news, VP Natausha Heleena White sold 10,190 shares of SPX Technologies stock in a transaction that occurred on Tuesday, November 8th. The stock was sold at an average price of $69.83, for a total value of $711,567.70. Following the sale, the vice president now directly owns 33,518 shares in the company, valued at $2,340,561.94. The transaction was disclosed in a document filed with the SEC, which can be accessed through this link. Company insiders own 3.70% of the company’s stock.

SPX Technologies, Inc supplies infrastructure equipment serving the heating, ventilation, and cooling (HVAC); and detection and measurement markets in the United States, China, the United Kingdom, and internationally. The company operates in two segments, HVAC and Detection and Measurement. The HVAC segment engineers, designs, manufactures, installs, and services package and process cooling products and engineered air movement solutions for the HVAC industrial and power generation markets, as well as boilers and comfort heating and ventilation products for the residential and commercial markets. 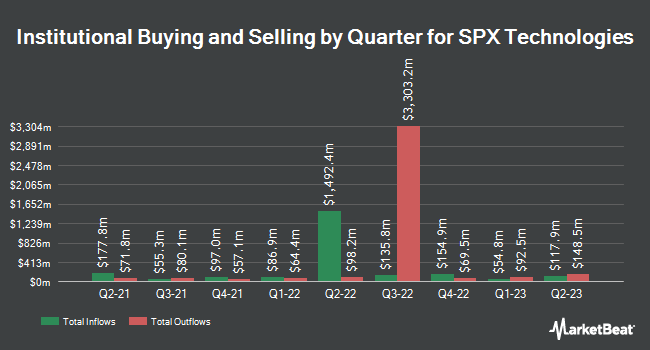 Complete the form below to receive the latest headlines and analysts' recommendations for SPX Technologies with our free daily email newsletter: