Separately, StockNews.com started coverage on shares of Mueller Industries in a research report on Wednesday, October 12th. They issued a “buy” rating on the stock.

In related news, Director John B. Hansen sold 1,000 shares of the company’s stock in a transaction dated Thursday, October 20th. The shares were sold at an average price of $63.13, for a total value of $63,130.00. Following the transaction, the director now owns 56,885 shares in the company, valued at approximately $3,591,150.05. The sale was disclosed in a document filed with the SEC, which is accessible through the SEC website. 2.90% of the stock is currently owned by company insiders.

The company also recently declared a quarterly dividend, which was paid on Friday, December 16th. Investors of record on Friday, December 2nd were paid a $0.25 dividend. This represents a $1.00 dividend on an annualized basis and a yield of 1.51%. The ex-dividend date was Thursday, December 1st. Mueller Industries’s payout ratio is 8.79%. 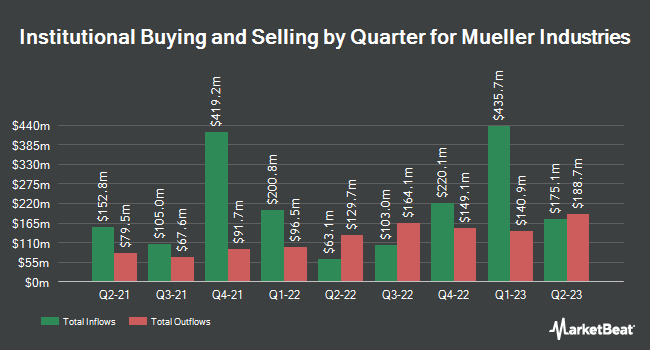 Complete the form below to receive the latest headlines and analysts' recommendations for Mueller Industries with our free daily email newsletter: