Wipfli Financial Advisors LLC acquired a new stake in shares of United Bankshares, Inc. (NASDAQ:UBSI – Get Rating) during the third quarter, according to its most recent disclosure with the SEC. The fund acquired 1,167 shares of the financial services provider’s stock, valued at approximately $42,000.

In other news, Director J Paul Mcnamara sold 2,500 shares of the business’s stock in a transaction that occurred on Tuesday, November 15th. The stock was sold at an average price of $42.75, for a total transaction of $106,875.00. Following the transaction, the director now owns 62,699 shares of the company’s stock, valued at approximately $2,680,382.25. The transaction was disclosed in a filing with the SEC, which is accessible through the SEC website. Corporate insiders own 4.22% of the company’s stock.

United Bankshares (NASDAQ:UBSI – Get Rating) last released its earnings results on Thursday, October 27th. The financial services provider reported $0.76 earnings per share for the quarter, beating the consensus estimate of $0.67 by $0.09. The firm had revenue of $273.37 million for the quarter, compared to the consensus estimate of $267.31 million. United Bankshares had a return on equity of 7.76% and a net margin of 33.19%. During the same quarter in the previous year, the company posted $0.71 EPS. As a group, equities analysts anticipate that United Bankshares, Inc. will post 2.88 earnings per share for the current fiscal year.

The business also recently announced a quarterly dividend, which was paid on Tuesday, January 3rd. Stockholders of record on Friday, December 9th were given a dividend of $0.36 per share. This represents a $1.44 annualized dividend and a dividend yield of 3.55%. The ex-dividend date of this dividend was Thursday, December 8th. United Bankshares’s dividend payout ratio is currently 54.75%.

Several analysts recently issued reports on UBSI shares. Piper Sandler reissued a “neutral” rating and set a $45.00 target price on shares of United Bankshares in a research note on Monday, December 5th. StockNews.com downgraded United Bankshares from a “hold” rating to a “sell” rating in a research note on Wednesday, January 11th. One equities research analyst has rated the stock with a sell rating, two have assigned a hold rating and two have issued a buy rating to the company’s stock. According to data from MarketBeat.com, United Bankshares currently has an average rating of “Hold” and an average target price of $41.33. 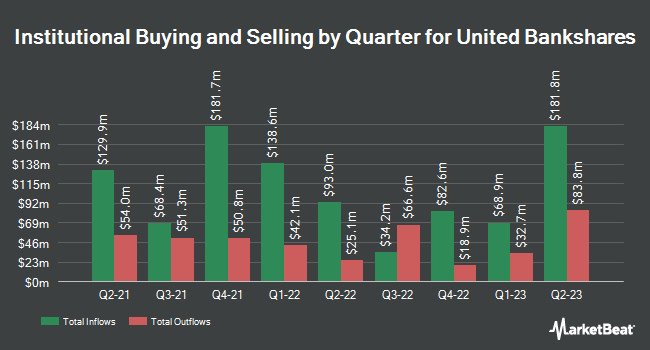 Siemens Healthineers Given a €58.00 Price Target by Berenberg Bank Analysts

Bayerische Motoren Werke Aktiengesellschaft Given a €113.00 Price Target at The Goldman Sachs Group

freenet Given a €27.00 Price Target by Deutsche Bank Aktiengesellschaft Analysts

Aurubis Given a €102.00 Price Target by Warburg Research Analysts

Complete the form below to receive the latest headlines and analysts' recommendations for United Bankshares with our free daily email newsletter: