Comerica Bank reduced its holdings in Progress Software Co. (NASDAQ:PRGS – Get Rating) by 5.9% during the 3rd quarter, according to the company in its most recent Form 13F filing with the Securities and Exchange Commission. The firm owned 46,340 shares of the software maker’s stock after selling 2,887 shares during the period. Comerica Bank owned about 0.11% of Progress Software worth $2,258,000 at the end of the most recent quarter.

Progress Software (NASDAQ:PRGS – Get Rating) last announced its quarterly earnings results on Tuesday, January 17th. The software maker reported $1.12 earnings per share for the quarter, beating the consensus estimate of $1.09 by $0.03. Progress Software had a net margin of 14.75% and a return on equity of 39.31%. The firm had revenue of $159.17 million for the quarter, compared to analysts’ expectations of $163.04 million. During the same quarter in the previous year, the company posted $0.92 EPS. The company’s revenue was up 10.7% compared to the same quarter last year. On average, research analysts predict that Progress Software Co. will post 3.46 EPS for the current year.

A number of brokerages have commented on PRGS. Citigroup reduced their target price on Progress Software from $52.00 to $46.00 in a report on Thursday, September 29th. StockNews.com raised Progress Software from a “buy” rating to a “strong-buy” rating in a research note on Thursday, November 3rd. Two equities research analysts have rated the stock with a hold rating, three have given a buy rating and one has issued a strong buy rating to the company. According to data from MarketBeat.com, the company has a consensus rating of “Moderate Buy” and a consensus target price of $52.75. 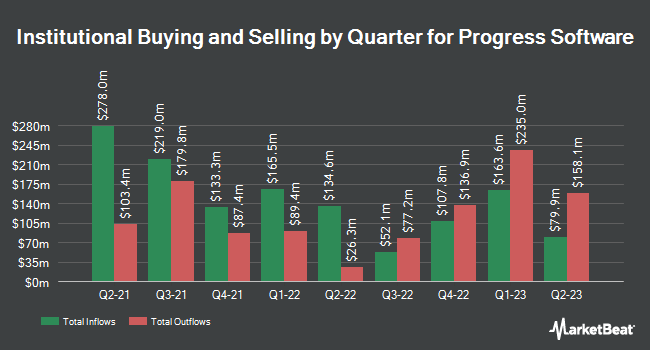 Complete the form below to receive the latest headlines and analysts' recommendations for Progress Software with our free daily email newsletter: