Otter Tail Co. (NASDAQ:OTTR – Get Rating) – Equities researchers at KeyCorp lowered their FY2024 earnings estimates for shares of Otter Tail in a report issued on Monday, January 16th. KeyCorp analyst S. Karp now anticipates that the utilities provider will post earnings per share of $3.45 for the year, down from their previous estimate of $3.66. The consensus estimate for Otter Tail’s current full-year earnings is $6.60 per share. KeyCorp also issued estimates for Otter Tail’s FY2025 earnings at $3.73 EPS.

The business also recently announced a quarterly dividend, which was paid on Friday, December 9th. Shareholders of record on Tuesday, November 15th were given a dividend of $0.412 per share. The ex-dividend date was Monday, November 14th. This represents a $1.65 annualized dividend and a yield of 2.69%. Otter Tail’s payout ratio is presently 23.54%.

In related news, Director John D. Erickson sold 2,000 shares of the company’s stock in a transaction on Monday, November 21st. The shares were sold at an average price of $56.31, for a total value of $112,620.00. Following the completion of the transaction, the director now directly owns 3,633 shares in the company, valued at $204,574.23. The sale was disclosed in a document filed with the Securities & Exchange Commission, which can be accessed through this hyperlink. 2.00% of the stock is currently owned by company insiders. 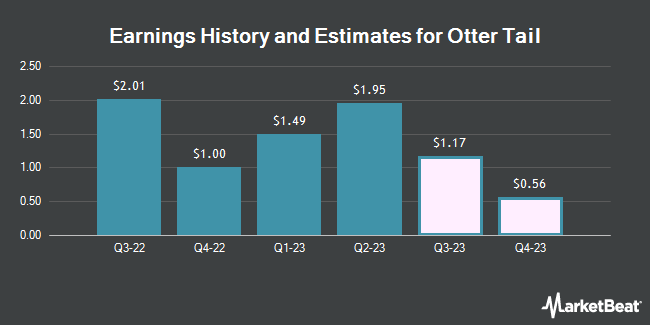