StockNews.com cut shares of Independent Bank Group (NASDAQ:IBTX – Get Rating) from a hold rating to a sell rating in a report published on Wednesday.

IBTX has been the topic of several other reports. Truist Financial cut their target price on Independent Bank Group from $74.00 to $70.00 in a research note on Friday, December 9th. Hovde Group downgraded Independent Bank Group from an outperform rating to a market perform rating and cut their target price for the company from $82.50 to $70.00 in a research note on Wednesday, October 26th. One investment analyst has rated the stock with a sell rating, two have issued a hold rating and three have assigned a buy rating to the company’s stock. According to MarketBeat.com, the company has a consensus rating of Hold and an average price target of $73.75.

Independent Bank Group (NASDAQ:IBTX – Get Rating) last posted its quarterly earnings results on Monday, October 24th. The bank reported $1.33 earnings per share for the quarter, missing the consensus estimate of $1.35 by ($0.02). Independent Bank Group had a return on equity of 8.77% and a net margin of 31.47%. The company had revenue of $160.75 million during the quarter, compared to analysts’ expectations of $160.09 million. During the same quarter in the previous year, the company earned $1.22 EPS. On average, equities research analysts predict that Independent Bank Group will post 5.1 earnings per share for the current fiscal year. 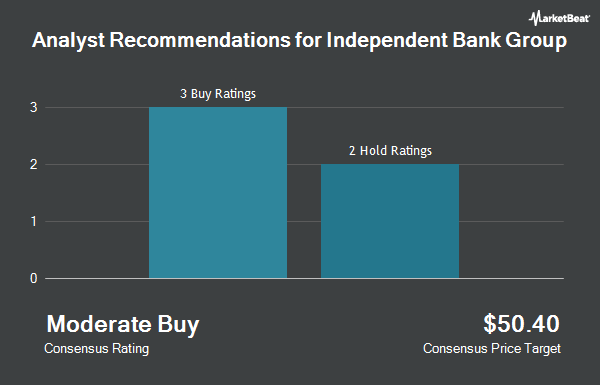