Arconic (NYSE:ARNC – Get Rating) last posted its quarterly earnings results on Tuesday, November 1st. The basic materials company reported $0.05 earnings per share for the quarter, missing the consensus estimate of $0.19 by ($0.14). The company had revenue of $2.28 billion for the quarter, compared to analyst estimates of $2.17 billion. Arconic had a return on equity of 8.54% and a net margin of 0.58%. The firm’s revenue for the quarter was up 20.6% compared to the same quarter last year. During the same period last year, the firm earned $0.15 EPS. On average, analysts predict that Arconic Co. will post 1.4 earnings per share for the current fiscal year.

Arconic declared that its board has authorized a stock buyback program on Wednesday, November 16th that authorizes the company to buyback $200.00 million in outstanding shares. This buyback authorization authorizes the basic materials company to reacquire up to 9.9% of its shares through open market purchases. Shares buyback programs are generally a sign that the company’s leadership believes its shares are undervalued.

In related news, Director William F. Austen purchased 10,000 shares of the stock in a transaction on Monday, November 21st. The shares were purchased at an average price of $19.84 per share, with a total value of $198,400.00. Following the transaction, the director now directly owns 10,000 shares of the company’s stock, valued at $198,400. The acquisition was disclosed in a filing with the SEC, which is available at this hyperlink. Insiders own 0.79% of the company’s stock. 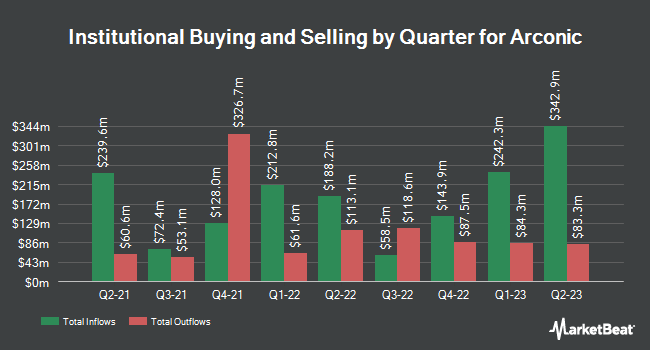 Receive News & Ratings for Arconic Daily - Enter your email address below to receive a concise daily summary of the latest news and analysts' ratings for Arconic and related companies with MarketBeat.com's FREE daily email newsletter.

Complete the form below to receive the latest headlines and analysts' recommendations for Arconic with our free daily email newsletter: