Ecolab (NYSE:ECL – Get Rating) last issued its quarterly earnings results on Tuesday, November 1st. The basic materials company reported $1.30 EPS for the quarter, missing analysts’ consensus estimates of $1.33 by ($0.03). The business had revenue of $3.67 billion for the quarter, compared to analyst estimates of $3.68 billion. Ecolab had a return on equity of 18.10% and a net margin of 8.13%.

Institutional Investors Weigh In On Ecolab

In related news, Director David Maclennan bought 800 shares of Ecolab stock in a transaction dated Tuesday, November 8th. The shares were acquired at an average cost of $139.66 per share, with a total value of $111,728.00. Following the completion of the transaction, the director now owns 12,597 shares in the company, valued at approximately $1,759,297.02. The purchase was disclosed in a filing with the SEC, which can be accessed through this link. 1.04% of the stock is currently owned by corporate insiders.

The company also recently disclosed a quarterly dividend, which was paid on Tuesday, January 17th. Investors of record on Tuesday, December 20th were given a $0.53 dividend. This is a positive change from Ecolab’s previous quarterly dividend of $0.51. This represents a $2.12 dividend on an annualized basis and a yield of 1.43%. The ex-dividend date was Monday, December 19th. Ecolab’s dividend payout ratio is 53.94%. 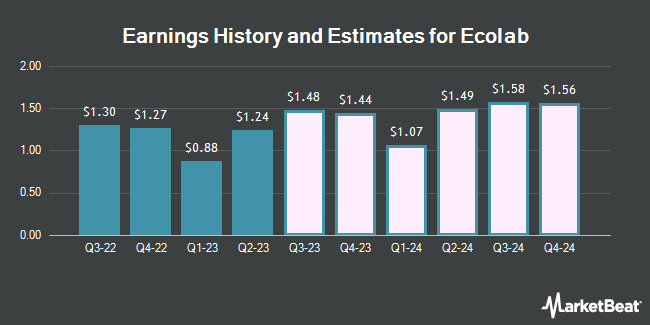