Mitsubishi UFJ Kokusai Asset Management Co. Ltd. acquired a new position in Grocery Outlet Holding Corp. (NASDAQ:GO – Get Rating) in the third quarter, according to the company in its most recent disclosure with the Securities & Exchange Commission. The institutional investor acquired 111,500 shares of the company’s stock, valued at approximately $3,712,000. Mitsubishi UFJ Kokusai Asset Management Co. Ltd. owned 0.12% of Grocery Outlet as of its most recent SEC filing.

Grocery Outlet (NASDAQ:GO – Get Rating) last released its quarterly earnings results on Tuesday, November 8th. The company reported $0.17 EPS for the quarter, missing the consensus estimate of $0.20 by ($0.03). The company had revenue of $918.19 million during the quarter, compared to the consensus estimate of $880.51 million. Grocery Outlet had a return on equity of 7.83% and a net margin of 1.63%. Equities analysts predict that Grocery Outlet Holding Corp. will post 0.76 earnings per share for the current fiscal year.

Want to see what other hedge funds are holding GO? Visit HoldingsChannel.com to get the latest 13F filings and insider trades for Grocery Outlet Holding Corp. (NASDAQ:GO – Get Rating). 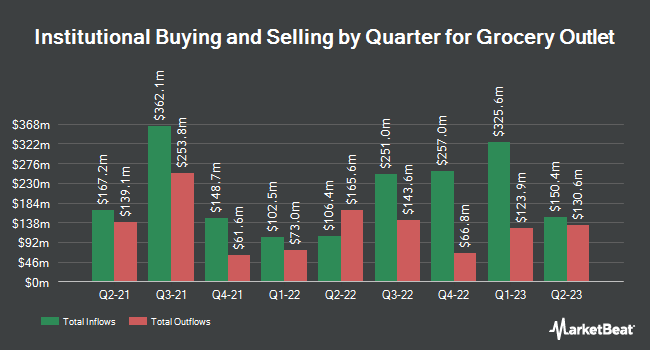