Planet Fitness, Inc. (NYSE:PLNT – Get Rating) has received an average rating of “Moderate Buy” from the sixteen ratings firms that are currently covering the company, Marketbeat.com reports. Three equities research analysts have rated the stock with a hold recommendation and nine have given a buy recommendation to the company. The average 1 year price objective among brokers that have issued a report on the stock in the last year is $93.46.

Planet Fitness (NYSE:PLNT – Get Rating) last released its earnings results on Tuesday, November 8th. The company reported $0.42 earnings per share (EPS) for the quarter, topping analysts’ consensus estimates of $0.39 by $0.03. Planet Fitness had a net margin of 8.52% and a negative return on equity of 36.77%. The company had revenue of $244.39 million during the quarter, compared to the consensus estimate of $237.40 million. On average, equities analysts predict that Planet Fitness will post 1.59 earnings per share for the current year.

Planet Fitness, Inc engages in the operation and franchising of fitness centers. It operates through the following segments: Franchise, Corporate-Owned Stores, and Equipment. The Franchise segment includes operations related to the company’s franchising business in the United States, Puerto Rico, Canada, the Dominican Republic, Panama, Mexico, and Australia. 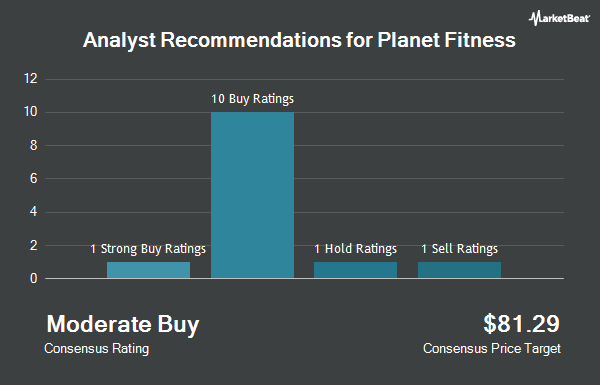