Separately, Wells Fargo & Company decreased their price target on Brookfield Renewable from $41.00 to $37.00 and set an “overweight” rating for the company in a report on Monday, November 7th.

Brookfield Renewable (NYSE:BEPC – Get Rating) last issued its quarterly earnings results on Friday, November 4th. The company reported ($0.25) earnings per share for the quarter, missing analysts’ consensus estimates of ($0.11) by ($0.14). The business had revenue of $1.11 billion during the quarter, compared to analysts’ expectations of $1.02 billion. As a group, analysts anticipate that Brookfield Renewable Co. will post -0.48 EPS for the current year.

The business also recently disclosed a quarterly dividend, which was paid on Friday, December 30th. Stockholders of record on Wednesday, November 30th were given a dividend of $0.32 per share. The ex-dividend date of this dividend was Tuesday, November 29th. This represents a $1.28 dividend on an annualized basis and a dividend yield of 4.12%. Brookfield Renewable’s dividend payout ratio (DPR) is presently -228.57%.

Brookfield Renewable Corporation owns and operates a portfolio of renewable energy power generating facilities primarily in the United States, Europe, Colombia, and Brazil. It operates hydroelectric, wind, and solar power plants with an installed capacity of approximately 12,723 megawatts. The company was incorporated in 2019 and is headquartered in New York, New York.

Want to see what other hedge funds are holding BEPC? Visit HoldingsChannel.com to get the latest 13F filings and insider trades for Brookfield Renewable Co. (NYSE:BEPC – Get Rating). 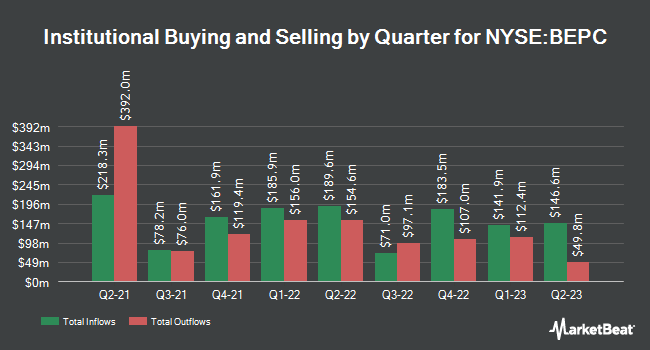 Complete the form below to receive the latest headlines and analysts' recommendations for Brookfield Renewable with our free daily email newsletter: