Root (NASDAQ:ROOT – Get Rating) had its price objective decreased by analysts at Wells Fargo & Company from $9.00 to $6.00 in a research report issued on Wednesday, Benzinga reports. The firm currently has an “equal weight” rating on the stock. Wells Fargo & Company‘s target price suggests a potential upside of 21.95% from the stock’s previous close.

Root (NASDAQ:ROOT – Get Rating) last posted its quarterly earnings results on Wednesday, November 9th. The company reported ($4.54) earnings per share for the quarter, topping analysts’ consensus estimates of ($6.01) by $1.47. The firm had revenue of $73.70 million for the quarter, compared to analyst estimates of $75.74 million. Root had a negative net margin of 102.25% and a negative return on equity of 78.93%. As a group, sell-side analysts expect that Root will post -21 EPS for the current fiscal year.

In related news, major shareholder Meyer Malka sold 19,536 shares of the company’s stock in a transaction that occurred on Monday, December 19th. The shares were sold at an average price of $4.76, for a total transaction of $92,991.36. Following the sale, the insider now directly owns 77,907 shares of the company’s stock, valued at approximately $370,837.32. The sale was disclosed in a legal filing with the SEC, which is available through this link. 27.59% of the stock is owned by insiders.

Institutional Investors Weigh In On Root 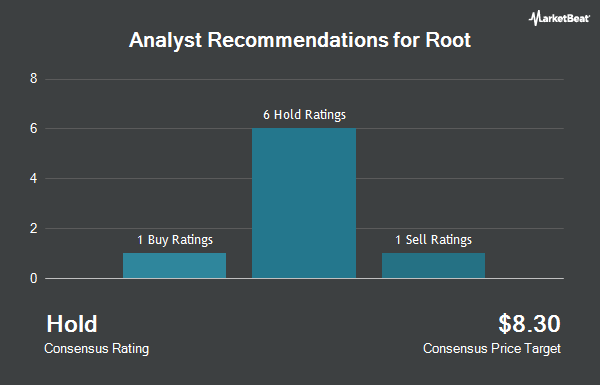