Boot Barn (NYSE:BOOT – Get Rating) had its target price upped by analysts at UBS Group from $69.00 to $75.00 in a note issued to investors on Thursday, The Fly reports. UBS Group’s price objective points to a potential upside of 2.81% from the company’s current price.

Boot Barn (NYSE:BOOT – Get Rating) last issued its quarterly earnings data on Wednesday, October 26th. The company reported $1.06 earnings per share (EPS) for the quarter, topping the consensus estimate of $0.91 by $0.15. The business had revenue of $351.55 million during the quarter, compared to the consensus estimate of $343.00 million. Boot Barn had a return on equity of 29.71% and a net margin of 11.68%. The business’s revenue was up 12.4% on a year-over-year basis. During the same period in the previous year, the firm posted $1.22 earnings per share. Sell-side analysts forecast that Boot Barn will post 5.75 earnings per share for the current fiscal year.

In related news, CFO James M. Watkins acquired 2,500 shares of the business’s stock in a transaction dated Wednesday, November 9th. The stock was bought at an average price of $52.34 per share, for a total transaction of $130,850.00. Following the transaction, the chief financial officer now owns 11,730 shares of the company’s stock, valued at $613,948.20. The purchase was disclosed in a filing with the SEC, which is available through this hyperlink. Insiders own 1.20% of the company’s stock. 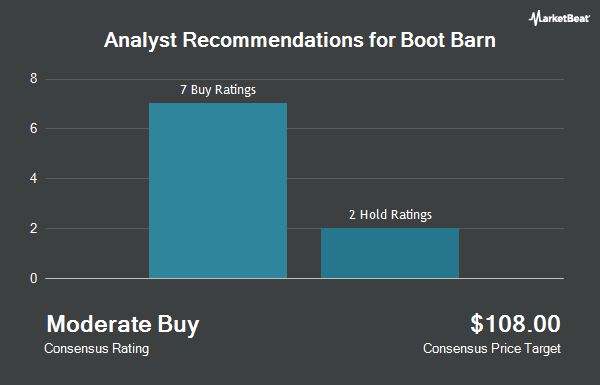